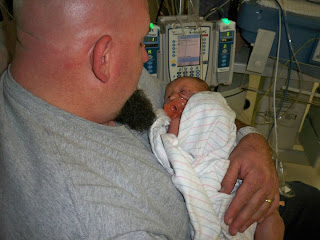 Few things impact our lives as much as loss does, especially the loss of a child. I was talking to my nephew, Steve at my mother’s New Years Eve party, and the conversation turned to his little daughter, Laila, who passed away on November 22, 2010 at the age of 18 days of complications from Hypoplastic Left Heart Syndrome, and as we talked, I could see deep into his heart.

Steve, normally a happy, smiling person is now struggling with feelings so raw that it is exhausting. He feels the need to be strong for his family, and all too often, I think many people take his strength for granted. Sometimes the smallest things in our lives are the things than have the ability to bring us to our knees, and for Steve that is Laila. From the day she arrived she stole his heart. It was so obvious in the way they looked at each other, that she would be “Daddy’s Little Girl” and Steve, well he would have a new home…wrapped around her tiny little finger. Steve and Jenny have 3 sons, but this child was the long awaited daughter, and while they would have felt the same loss over any of their children, this hit very hard. Laila was sweet and beautiful with olive skin and dark hair, just like her mommy, in fact I believe she would have looked just like Jenny as she grew up.

To say the least, Steve was smitten. He is such a good daddy, very involved in the lives of his children, and Laila would have been so blessed to be a part of this family. It just breaks my heart to see the pain of loss that is etched on Steve’s face now, and to know that there are those who simply don’t understand his feelings. This is a deeply loving man, who is such a big blessing to his family. He is also a very strong man, and I think that sometimes people don’t think that he could have the deeply loving emotions that he carries inside toward those of us that are fortunate enough to be a close part of his life.

Steve loves with all he has, and he has a big heart, so there is a lot of love to give. And really he asks for so little back. He works hard to support his family and doesn’t want Jenny to work, but rather wants her to be able to stay at home and raise the children. He is a deeply spiritual man as well, and loves his Lord and Savior. He makes sure his family is in church every week, and while many would not see this as unusual, the truth is that Steve wasn’t raised in church, but committed his life to the Lord after he met Jenny. But truly, the defining aspect of Steve’s life is being a husband and father. He lives for it, and when something like the loss of a child enters his life it just tears him up. My heart just aches for this loving man with a father’s heart and empty arms. I love you Steve, and I wish I could ease your pain somehow, but as with Jenny, I can only pray for peace in your father’s heart and comfort for your empty arms.

6 Responses to A Father’s Love