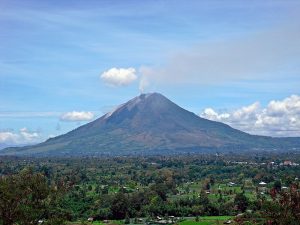 When a volcano hasn’t erupted for 400 years, people naturally assume that the volcano is dead, but volcanos don’t really die, they become dormant. In the case of Mount Sinabung, located on the Indonesian island of Sumatra. On August 29, 2010, Mount Sinabung experienced a minor eruption. The mountain had been rumbling for several days. Ash spewed into the atmosphere up to 0.93 miles high and lava was seen overflowing the crater. The four centuries of quiet were over. The most recent eruption prior to 2010 was in 1600. On August 31, 6,000 of the 30,000 villagers who had been evacuated returned to their homes. As volcanoes go, a category “A” must be monitored frequently, because it is very active. Mount Sinabung was assigned to a category “B,” meaning that no one would really know that more eruptions were on the horizon, unless more rumbling was heard in the days ahead

of the eruption. Following the eruption, the Indonesian Red Cross Society and the Health Ministry of Indonesia sent doctors and medicines to the area. The National Disaster Management Agency also provided face masks and food to assist the evacuees.

On Friday, September 3, 2010, two more eruptions occurred. The first one happened at 4:45am, forcing more villagers to leave their houses…some of whom had only returned the day before. This Was the biggest eruption to that date…maybe another reason to start to feel apprehensive. In this eruption, ash spewed up into the atmosphere about 1.9 miles high. In the hours before the eruption, a warning had been issued through the volcanology agency, and most villagers were prepared to leave quickly. A second eruption occurred the same evening, around 6pm. The eruption came with earthquakes which were felt up to 15.5 miles away from the volcano.

Then, on Tuesday September 7, Mount Sinabung erupted yet again…its biggest eruption since it had become active on August 29, 2010. Finally, Mount Sinabung had reached the point of a category “A” listing. Experts warned of more eruptions to come and began monitoring it closely. Indonesia’s chief vulcanologist, Surono, said 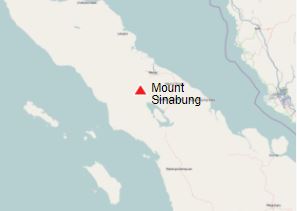 “It was the biggest eruption yet and the sound was heard from 8 kilometers away. The smoke was 5,000 meters in the air.” Heavy rain mixed with the ash to form muddy coatings, a centimeter thick, on buildings and trees. Electricity in one village was cut off, but there were no casualties in that instance. At least 14 people were killed in the early days of the eruptions. Following the reawakening of Mount Sinabung, it has erupted numerous times over the years since, with eruptions every year. It is a highly volatile volcano. The last eruption of Mount Sinabung was on August 10, 2020, producing an eruption column of volcanic materials as high as 16,400 feet into the sky. It doesn’t look like Mount Sinabung will become dormant again anytime soon.