Did I Do My Best? 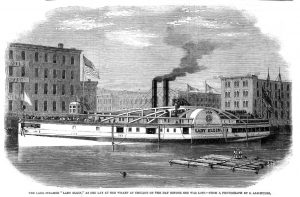 Just before midnight on September 7, 1860, a palatial sidewheel steamboat named the Lady Elgin left Chicago bound for Milwaukee. She was carrying about 400 passengers. She was returning to Milwaukee from a day-long outing to Chicago. Also on the water that night was the Augusta, a schooner filled with lumber. The captain of the Lady Elgin took notice of the Augusta around 2:30am. The night was stormy, and visibility was poor. Storm clouds raged and the waves were intense.

Suddenly, the lumber on the Augusta shifted, causing the two ships to collide. Instantly, the party atmosphere that had been on the Lady Elgin, turned to chaos and confusion. The Augusta received only minor damage in the collision, and kept right on sailing to Chicago. It wasn’t an unusual occurrence in those days. It’s possible that the Augusta assumed that if it wasn’t badly hurt, that larger ship probably wasn’t either. I can’t say for sure, but I know that this collision, in which the Augusta did not stop is not the first I have heard of such an incident in Maritime history. A large hole in the side of the Lady Elgin doomed the ship, which sank within thirty minutes. Only three lifeboats were able to be loaded and set into the water. The ships large upper hurricane deck fell straight into the water and served as a raft for some forty people.

The ship had crashed two to three miles off the shore of Highland Park, but the waves were so strong that survivors, bodies, and debris were all swept down to the northern shore of Winnetka. In those days, the lakeshore in this area consisted of a narrow strip of beach rising up to clay cliffs almost 50 feet high. An angry line of breakers churned up from the storm were crashing ashore. Around 6:30am the first of the three lifeboats made it to shore in the vicinity of the Jared Gage house…which still stands at 1175 Whitebridge Hill Road. A desperate call for assistance went out to the town from the Gage house. The people of Winnetka rode 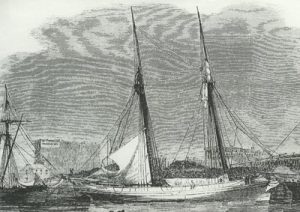 horses down to Northwestern University and the Garrett Biblical Institute to find any young men to help pull out survivors. The regional newspapers were quickly informed by telegraph. The newly completed Chicago and Milwaukee train line brought people to Winnetka to help as word of the accident spread. The effort to save the people on the Lady Elgin would have been a phenomenal feat today, but it was carried out in 1860, making it even more amazing.

The crowds on the bluffs and beaches watched as pieces of wreckage washed up near the site of the present Winnetka water tower. By 10:00am, the bluffs were littered with people who had been strong enough to withstand the fierce storm of the previous night. Lastly came the hurricane deck with Captain Wilson and eight survivors whom the storm had thus far spared. Then, before their eyes, this storm-battered deck was dashed to pieces on an offshore sandbar and all on board were lost.

The storm left a tremendous undertow, creating the tragic situation…the exhausted victims had drifted close enough to the Winnetka shore to see it, only to be held back by the breakers. As the horrified onlookers watch, they died in full view of the people on shore, who could do nothing but watch. Men were lowered from the bluff with rope tied around their waists in attempts to pull people in to safety. One Evanston seminary student, Edward Spencer, is credited with saving 18 lives. Spencer is said to have repeatedly rushed into the sea, being battered by debris in order to save more people. I do not know, but I suspect that he is some relation to me on my Spencer side, and I feel honored that he was such a heroic figure. Spencer is said to have wondered many times in the aftermath, “Did I do my best?” It is the mark of a hero, never to feel like they did enough. Another man, Joseph Conrad, was said to have pulled 28 to safety. Other unknown rescuers pulled in survivors up and 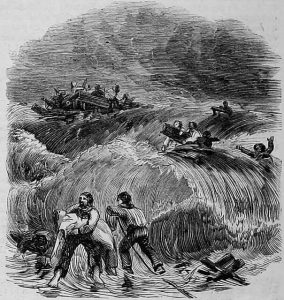 down the Winnetka and North Shore coastline.

The Gage house, the Artemas Carter house at 515 Sheridan Road, and other Winnetka residences served as temporary hospitals. The newly-built Winnetka train depot served as a morgue. Winnetka residents brought food and clothing for the survivors. It is estimated that 302 people lost their lives that day, the exact number is unknown, as the ships manifest went down with the ship. The 1860 census shows only 130 residents in the town of Winnetka. The tragedy captured the nation’s attention, but was quickly overshadowed by the 1860 elections and the Civil War. Such is the way of things. An tragic event is only well remembered, until another comes to take its place.