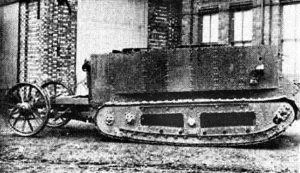 When I think of a tank, my thoughts go to an almost indestructible war machine, and I’m sure many people would agree with me. The tank was first introduced on September 6, 1915 in response to the trench warfare era of World War I. A British army colonel named Ernest Swinton and secretary of the Committee for Imperial Defense, William Hankey, championed the idea of an armored vehicle with “conveyor-belt-like tracks” over its wheels that could break through enemy lines and traverse difficult territory. It was a great idea, but the prototype tank nicknamed Little Willie manufactured in England was far from an overnight success. The tank was heavy, weighing in at 14 tons, but the big problem was that it got stuck in trenches and crawled over rough terrain at only two miles per hour. A tank isn’t much good if it has to be rescued, instead of rescuing the soldiers. It was also slow, and it became overheated and couldn’t cross the trenches. A second prototype, known as “Big Willie,” was produced. By 1916, this armored vehicle was deemed ready for battle and made its debut at the First Battle of the Somme near Courcelette, France, on September 15 of that year. Known as the Mark I, this first batch of tanks was hot, noisy and unwieldy and suffered mechanical malfunctions on the battlefield. Still, people began to realize the tank’s potential. Further design improvements were made and at the Battle of Cambrai in November 1917, 400 Mark IV’s proved much more successful than the Mark I, capturing 8,000 enemy troops and 100 guns.

As with any new invention, the tank had a few “bugs” to be worked out. Still, I doubt if that did much to assuage the fears of the men in the tanks when they got stuck in the trenches. Tanks are supposed to be able to withstand gun shots and shrapnel, but would the tank be able to do so. After all, tanks weren’t supposed to get stuck either, so just how trustworthy was the armor plating. A tank that gets stuck is really just a “sitting duck.” Nevertheless, improvements were made to the original prototype and eventually tanks completely transformed military battlefields.

Trench warfare of World War I truly was brutal, almost more for the men in the trenches than anyone else. 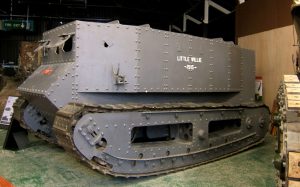 Finally, the men appealed to British navy minister Winston Churchill, who believed in the concept of a “land boat” and organized a Landships Committee to begin developing a prototype. To keep the project secret from enemies, production workers were reportedly told the vehicles they were building would be used to carry water on the battlefield…alternate theories suggest the shells of the new vehicles resembled water tanks. Either way, the new vehicles were shipped in crates labeled “tank” and the name stuck. Tanks rapidly became an important military weapon. During World War II, they played a prominent role across numerous battlefields. The tanks potential was finally an accepted fact.