So Close, And Yet So Far Away 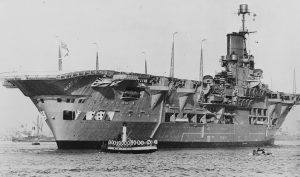 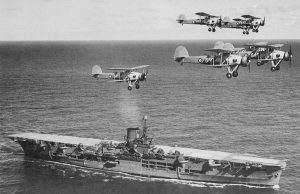 World War II brought with it necessary changes to war ships. Suddenly, the world had planes that could fly greater distances, and even had the ability to land on a ship, provided the ship was big enough to have a relatively short runway. I say relatively short, because the runways on ships seemed like they would be too short to safely land a plane, but they did. One such ship was the HMS Ark Royal.

The Ark Royal was an English ship designed in 1934 to fit the restrictions of the Washington Naval Treaty. The ship was built by Cammell Laird at Birkenhead, England, and was completed in November 1938. The design of this ship differed from previous aircraft carriers, in that Ark Royal was the first ship on which the hangars and flight deck were an integral part of the hull, instead of an add-on or part of the superstructure. This ship was designed to carry a large number of aircraft. There were two hangar deck levels. HMS Ark Royal served during a period of time during which we first saw the extensive use of naval air power. The Ark Royal played an integral part in developing and refining several carrier tactics.

HNS Ark Royal served in some of the most active naval theatres of the World War II. The ship was involved in the first aerial and U-boat kills of the war, operations off Norway, the search for the German battleship Bismarck, and the Malta Convoys. After Ark Royal survived several near misses, she became known as a “lucky ship” and the reputation stuck…at least until November 13, 1941, when the German submarine U-81 torpedoed her and she sank the following day. Nevertheless, only one of her 1,488 crew members was killed. Her sinking was the subject of several inquiries. While only one man was killed, investigators still couldn’t figure out how the carrier was lost…in spite of efforts to tow her to the naval base at Gibraltar. In the end, they found that several design flaws contributed to the loss. These flaws were rectified in subsequent British carriers. There was, of course, no time to look for the ship then. The war was still going on. 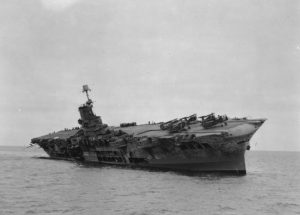 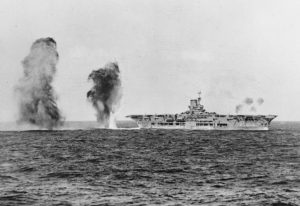 The wreck was discovered in December 2002 by an American underwater survey company using sonar mounted on an autonomous underwater vehicle. The company was under contract from the BBC for the filming of a documentary about the HMS Ark Royal. The ship was at a depth of about 3,300 feet and approximately 30 nautical miles from Gibraltar. So close, and yet so far away.