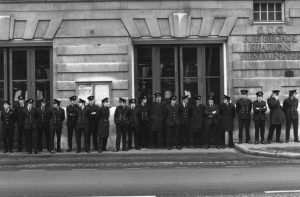 When we think of emergency personnel, we think of people who willingly put their lives on the line for others, and that is a good analogy, but while these people are passionate about their career, it is still a career. They expect, and need to be paid accordingly. Their job is dangerous, and they risk their lives every day, to go out and save other people. Unfortunately, they have to make a living too. For firefighters in England in 1977, the living they were making, wasn’t enough to support their families. So, as often happens, when the pay doesn’t equal the risk, the firefighters went on strike. They were demanding a 30% raise in pay.

As the strike began, the 30,000 strong Fire Brigades Union claimed that 97.5% of its members had heeded the strike call and were no longer manning the pumps. It doesn’t take much imagination to realize that without firefighters, the cities were in serious trouble. Talks continued between union leaders and employers, but it didn’t look like there would be an early resolution, because the government insisted there was no breach of its 10% public sector pay ceiling.

As the situation became more critical, troops were brought in to provide emergency coverage of the cities. There was still concern among the soldiers about their lack of training and modern firefighting equipment. They would do their jobs, but that didn’t mean that they would know how to do it well. The reality is that firefighting is a highly skilled job, in which the people are trained, and they know the risks.

The firefighters said that they had already waited two years for the Government to consider their pay claim…and they were done waiting. During that two years, the police department had received a substantial pay rise while firefighters, in line with many others, had to settle for £6 per week. Much of the discussion between the union and employers is focused on the possibility of a reduction in the 48-hour working week, which would allow officers to earn considerable overtime payments.

In many areas firefighters have deserted their stations only reluctantly. Firemen, still wearing their uniforms and pickets armbands, rushed to the scene of a fire at St Andrew’s Hospital in Bow, East London, after a basement storeroom caught light. One of the officers said: “We couldn’t let them die.” And, “It was a hospital, what else could we do but come and help?” A colleague Barry Holmes said: “The situation here was really dangerous and people could have died if we had not come.” Emergency troops arrived at the scene first, and fire officers said afterwards that without their help the building would have burned to the ground.

“Elsewhere in the country, troops averted a major catastrophe on Merseyside when they stopped a haulage depot blaze at Kirkdale spreading to a 500 gallon gasoline storage tank. A woman and her twin sons escaped from a bungalow at Wallington in Surrey after a gas container exploded starting a fire. Troops in a Green Goddess had to drive 25 minutes from Croydon and the house was destroyed. The local fire station was less than three minutes drive away.” The striking firefighters received no strike pay, but got donations from the 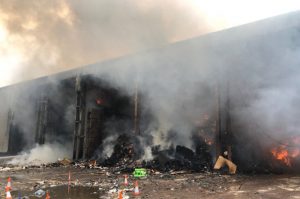 public as Christmas approached. The insurance companies picked up the final bill for the dispute with payouts totaling £117.5m compared with £52.3m for the same three months the previous year. The firefighters eventually settled for a 10% increase, taking an average salary to just over £4,000, with the promise of more to come.

Firefighters went on strike again in 2002/2003, in a long-running dispute which included a series of one day strikes over a period of several months. They finally ended with a 16% pay raise that was tied to a modernization package. The Fire Brigades Union chief, Andy Gilchrist said at the time of the settlement it was “a first phase” towards raising a fire officer’s basic pay to £30,000. I say, it was about time.