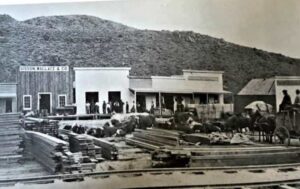 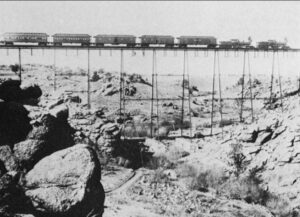 When the Transcontinental Railroad opened in 1869, the people in the east finally had the chance to take a trip into the Wild West without having to move there or plan on spending months there visiting family. I can imagine that there were mixed emotions involved as they headed out. The Western dime novels had told of wild Indians, gunslingers, bank robberies, and of course, train robberies. It was almost enough to make them question the sanity of their intended trip into the wild, but nevertheless, they went.

One of the great misconceptions of the Wild West is that it maybe wasn’t quite as wild as the Easterners had been told. In fact, the town of Palisade, Nevada, a state notoriously known for its wildness these days, like many other Wild West towns of the time, was actually very peaceful. In fact, the town had so few crimes that it didn’t even have an official sheriff. So, when the train began running through Palisade, and the train conductor 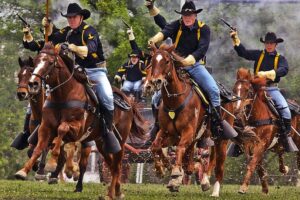 told the townspeople that railroad passengers were often disappointed at how these quiet towns were so different from how they were portrayed in the Western dime novels, he people of Palisade decided that something had to be done.

The townspeople, with the full knowledge and approval of the citizens of the town, the US Cavalry, and even a local Indian tribe, staged Western-style shootouts in the street, bank robberies, Indian battles, and whatever else they could think of. The whole purpose was to provide entertainment for the passing railroad travelers. After the train passed, life in the small town went back to its “dull, quiet, and peaceful” normal. I don’t know if the purpose was to bring in more tourists, to save face when it came to the Western dime novels, or maybe just to have a good laugh at the expense of the city-slickers. The reality is that many of the people back east, at that time, felt like their way of life was better than the “craziness” of the Wild West, and that to go have a look was a way of not only entertaining themselves, but also to prove that the West could not possibly be a peaceful place to live. Of course, while things could be violent and wild in the old West, it wasn’t always that

way. It’s also a possibility that the people had moved to the West wanted the people in the East to think that the West was a wild place, full of adventure. It was the whole purpose for going west anyway, wasn’t it…to find that adventure? Yes, that was the purpose for the move to the West. And that purpose had to be protected, by any means necessary…even theater.