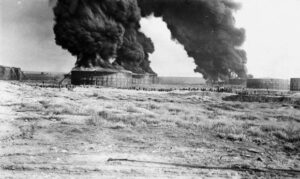 Recently, oil has taken a huge political hit, but most people know that oil is used for far more than the running vehicles. Oil has provided necessary energy to the United States, and even the electric cars can’t exist without petroleum products to make the wiring, tires, seats, floormats, hoses, and much more. In fact, most of us know that there is almost no area of life that isn’t affected by oil. It is part of the makeup of so many things. So, it is silly to think that we can run anything in this world completely void of oil. Living in Wyoming, I know of the value of oil, and many in my family work or have worked in the oil industry.

Casper, Wyoming has deep roots in the oil industry, and has long provided necessary energy for the nation. Casper’s roots began early on. In 1895, a man named Mark Shannon and a group of Pennsylvania investors opened the state’s first oil refinery in Casper. It was the beginning of an important economic future for Casper and the state. At first, the refinery was able to produce 100 barrels of lubricants per day…not a lot by today’s standards, but in those days, it was phenomenal. Since then, the oil industry has enjoyed a long and successful history, even if the industry did struggle at times. Wyoming is a “Boom-and-Bust” state. We have always been subject to that cycle.

Nevertheless, the early oil fields were quite successful. The Salt Creek and Shannon fields are located in central 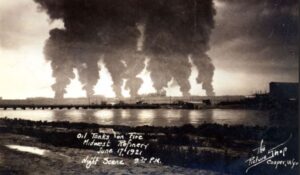 Wyoming. With them came the refineries and later, out of necessity, the tank farm oil storage facilities. Storing large quantities of oil, while relatively safe, faces the inevitable possibility of a fire. Safety was always a goal, but it seems an impossible task to stop all fires. The Casper refinery had their first boiler fire on March 5, 1895. Then came the construction of the Casper Tank Farm. According to the Natrona Tribune, reporting on April 18, 1895, “Workmen are now busy sinking a six-hundred-barrel storage reservoir for crude oil and a number of other new tanks and the machinery necessary to finish all grades of oil will be placed as soon as workmen can do so.” I’m sure this was both for storage and safety, but with oil, there is no guarantee.

That fact was never made so clear as it was on June 17, 1921, when lightning caused seven oil tanks to catch fire. This became known as the Midwest Oil Tank Farm Battle…and what a battle it was. In those days there was no set plan for fighting a fire in a refinery or a tank farm. It is something you really pray never happens. When lightning struck…in a very real way, they had to figure out how to get it under control, and not lose all of that oil in the tanks. Someone came up with the idea of piercing the tanks below the fire line, thus allowing the oil to drain into the fire dykes. The oil could then be scooped up and pumped into surrounding tanks that were not involved in the fire. It was definitely a great idea, but how were they going to do that? 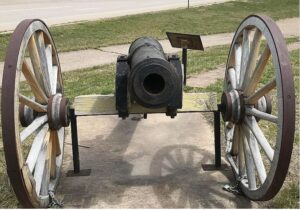 After giving it some thought, they decided to use some cannons from World War I. The first shot from the cannon hit high, and the oil gushed out toward the men firing the cannon. I’m sure that with the fires around them they must have panicked at least a little bit. These men weren’t firefighters. They were soldiers, so fire was not the enemy they were used to fighting. In all, nine shots were fired that day. One was aimed at a very high angle, and it flew off into areas unknown. Two of them went very low and were buried in the dirt under the tanks. Six shots were right on target. In the end, the operation was successful, and the fire was finally brought under control.