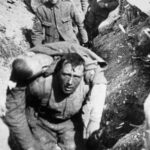 War is an ugly business, and the men and women who fight in wars are subjected to great stress and anxiety. These days, most of us recognize the term, PTSD (Post Traumatic Stress Disorder). We also recognize that a person doesn’t have to be in a war situation to have PTSD. Any traumatic event can trigger PTSD, and the symptoms of this disorder can be devastating. In fact, PTSD can result in things like suicide, attacks on others, institutionalization, or isolation.

During World War II, PTSD (then known as Shell Shock) first came to the attention of the military leaders. On October 4, 1944, General Dwight D Eisenhower distributed to his combat units a report by the US Surgeon General that revealed the hazards of prolonged exposure to combat. The then General’s report read, “[T]he danger of being killed or maimed imposes a strain so great that it causes men to break down. One look at the shrunken, apathetic faces of psychiatric patients…sobbing, trembling, referring shudderingly to ‘them shells’ and to buddies mutilated or dead, is enough to convince most observers of this fact.” General Eisenhower had been on the battlefield, and so, knew firsthand of the “attacks” on the minds and emotions of these poor soldiers. 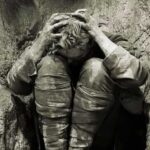 After evaluation of many cases of “Shell Shock” in the hospital wards, the American commanders came to the conclusion that the average soldier could last about 200 days in combat before suffering serious psychiatric damage. They looked into the fact that British commanders used a rotation method, pulling soldiers out of combat every 12 days for a four-day rest period, thereby enabling British soldiers to put in 400 days of combat before being deleteriously affected. The Surgeon General’s report went on to lament the fact that a “wound or injury is regarded, not as a misfortune, but a blessing.” Now, when a wound is considered a blessing, you know that things have taken a serious turn for the worst in the area of morale. That basically means that the soldiers will do just about anything to get off the battlefield. For them, death isn’t far from being acceptable either. General Eisenhower and the military leaders of that era could see that the war was clearly taking a toll on more than just men’s bodies. The far greater toll was on their minds and emotions. 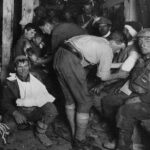 While I can see that the idea of a rotation, or a limited period of exposure to the battlefield could sound like a viable solution, in reality is is only a partial solution, and one that probably won’t really work. While the time spent on the battlefield can cause fatigue, both mentally and physically, it only takes one event to change the mental status of a person. Even a strong person is going to be effected by the horrific death of a comrade at the hands of a land mine. Yes, their own wounds would get them off the battlefield, but that will not take away the pictures of blood and death they have see on the battlefield. To take the soldiers off the battlefield after 200 days is a noble effort, but it is not likely to solve the problem of Shell Shock in the way that they had hoped. I guess that main thing is that they knew about it and were trying to fix it.