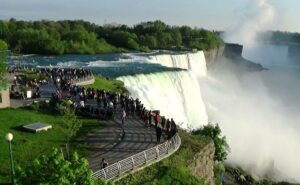 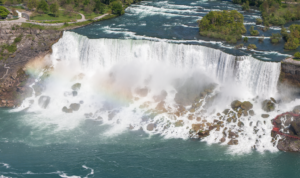 In the state of New York, just north of Buffalo, the Niagara Falls provide a beautiful border between the United States and Canada. It’s not the first time that water has been part of a border, but not many include a beautiful falls in the mix. Niagara Falls are considered one of the most well-known and breathtaking landmarks in North America. Having seen them for myself, I can attest to that. Tourists have come from all over the world to see this natural wonder as the power of the water has been on display for over 200 years.

The falls have always been beautiful, but they also have a dark side…and it might have been darker than anyone knew. In 1969, the waters that pounded through the Niagara Falls were stopped before they could get to the area, allowing the bedrock to be exposed and the water to be no more than a little stream. Seeing the Falls like this, for the first time in history, allowed researchers to see a part of this landscape that had been permanently hidden by water. What was found at the bottom of the dried out Falls brought visitors and researchers alike to their knees. Some things were never meant to be found.

The state government and the local community knew that the falls needed some major repairs, if the area was going to continue to have the major tourism business that it had enjoyed for so many years, but they were really not prepared for part of what they found when the water was basically stopped. Niagara Falls is actually made up of three waterfalls, that share a common cliff, making them combined in reality. The American Falls is known for being the most self-destructive one of the three. The water that was going over was eroding it over time. The locals were worried that the America Falls would eventually erode away the cliff, and the tourism trade would end.

What they weren’t really thinking about when the falls were stopped, was what was beneath the falls. Every year, a number of people decide to try some new stunt to gain attention, by going over the falls in a barrel, or some other such vehicle. It’s a crazy idea, and most don’t survive their stunt. That said, one might expect to find lots of bones beneath the falls, when the engineers and workers were standing at the bottom of the Falls, their faces showed total disbelief. “In addition to the massive talus rock and the never before seen geography of the bedrock, there was a far more sinister sight. As the water drew back and dried up so the workers could continue with the plan, they looked down and saw a bones and other remains at their feet. These were not animal remains, either, but human. Everyone at the scene was shocked, but they were also very curious.”

Before them, the engineers found the remains of two individuals, a man and a woman. It was impossible to find out who the remains belonged to, due to the fact that the remains were under water for so long, and the DNA testing and such that we have now were not available then. The whole grisly discovery, remained a mystery, but rumors circulated as to who the people could be. Most assumed that the man might have jumped, but they didn’t think the woman would have. The thing that was even more strange than finding two bodies beneath the falls, was that there were not more bodies of more crazy thrill seekers, because the base of the Falls has had around 5,000 bodies found at its base from 1850 to 2011. Authorities state that between 20 and 40 people a year end their lives right there at the Falls. This statistic is the reason why finding only two bodies in 1969 was so confusing. There should have been more bodies.

Another known, unknown found at the base of the falls were the many coins thrown in as people “made a wish” and tossed in their “lucky” wishing coin. As the engineers looked around, trying to find information on the mystery couple, they also found that there were millions upon millions of coins. While everyone as shocked at both findings, the main mission of the blockage of the water was to fix the falls and get them back on track. Despite the remains and coins that had been found, the point of the mission was to get water going again.

Incredibly, despite all the money and time that was spent on this project, after the talus was dried up in American Falls, the lead engineers made the final decision to leave the talus as is, because they realized that

the talus was actually supporting the cliff face behind it. To change it could cause the cliff to cave in. Instead they decided to focus on the project of giving the American Falls the revamp it needed. The team of engineers and construction workers came up with a plan to use bolts, anchors, and cables to stabilize the Falls, so that the falls and tourism could get back on track.