The Threat Of Tricks 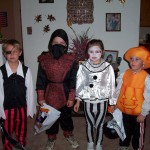 Every year…like clockwork, parents dress their children up in costumes, and the annual tradition of children roaming the neighborhoods, knocking on doors, and asking for treats…with the threat of tricks, if the “blackmail” is not paid…begins. It’s Halloween, of course. These days, not as many children really understand how the whole thing is supposed to work. They just see it as a day to gather up as much candy as possible. I read somewhere that children consume, on average, 7,000 calories worth of candy…or the equivalent of almost 11 Burger King Whoppers, without cheese, and not the new meatless version, of course. It’s a good thing that most kids are very active, or that many calories could be bad. And that isn’t even considering the sugar high that the parents will have to deal with. Try putting that child to bed after all that, and you’ll find that it’s going to be a long night. The best 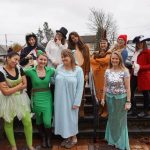 you can hope for is that the day falls on a Friday, so they don’t have to get up for school the next day…not the case this year, unfortunately.

So, with all the negative aside, the costumes people come up with are usually very cute. I prefer the costumes that don’t focus on the gruesome and horrific, but there are always a few of those. This year, with all my grandchildren grown up, we will only have our little great granddaughter heading out to see what she can come home with. At just 17 months, she will most likely only be going a few places, and since she is so little, she isn’t as totally addicted to candy as she will most likely become in future years. Nevertheless, I’ve never seen her turn down a treat either.

I remember Halloweens past, when my grandchildren were little. They couldn’t wait to get out there, and they 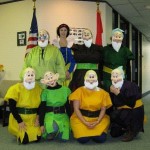 really preferred if their parents didn’t stand around and talk. After all, they had rounds to make, and it wasn’t getting any earlier. My grandchildren, Chris Petersen, Shai Royce, Caalab Royce, and Josh Petersen, always had the cutest costumes. I suppose I might be a bit biased, but I don’t care. I’m sure every parent and every grandparent feels the same way about their own little ones. It’s our prerogative!! Our little ones never had any tricks up their sleeves, that I knew of, but I do recall the year when I, as a little kid, was handed a little bar of soap, by my mother, Collene Spencer. It was my “trick” and I was only asked by one person, what trick I had up my sleeve. When I showed him the soap, he let out a great big guffaw!! He had no idea that I would even know what he meant. He said that it made his whole day!! Happy Halloween everyone!! Be safe out there!!