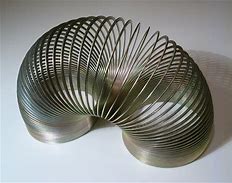 I think most people have played with a Slinky at one point or another in their lives. The Slinky is a pre-compressed helical spring toy invented by Richard James in the early 1940s. It is able to perform a number of tricks, including travelling down a flight of steps end-over-end as it stretches and re-forms itself with the aid of gravity and its own momentum, or appear to levitate for a period of time after it has been dropped. Kids have been known to spend hours playing with the simple spring, which rather defies the imagination in itself. Most kids tire easily of toys, so the long lasting play with a slinky was surprising. Still, as with all such toys, the Slinky eventually lost its draw, and few people play with it now.

The strangest thing about the Slinky is that it wasn’t invented to be a toy at all. In 1943, a naval mechanical 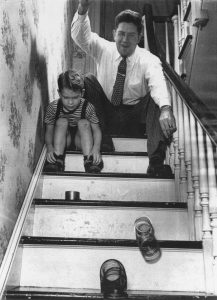 engineer named Richard James, who was stationed at the William Cramp and Sons shipyards in Philadelphia, was developing springs that could support and stabilize sensitive instruments aboard ships in rough seas. As he worked, James accidentally knocked one of the springs from a shelf, and watched as the spring “stepped” in a series of arcs to a stack of books, to a tabletop, and to the floor, where it re-coiled itself and stood upright. I’m sure the sight was funny, mostly because it was so unexpected. As his wife Betty later recalled, “He came home and said, ‘I think if I got the right property of steel and the right tension; I could make it walk.'” As with any inventor, I’m sure that his inventor’s mind was already clicking. James began to experiment with different types of steel wire over the next year, and finally found a spring that would walk. I’m sure he was like “a kid in a candy store” with each fine-tuning of the toy. Betty was skeptical at first, but changed her mind after the toy was fine-tuned and neighborhood children expressed an excited interest in it. She dubbed the toy Slinky, by which she meant “sleek and graceful,” after finding the word in a dictionary, Betty decided that this word exactly described the sound of a metal spring expanding and collapsing.

The couple formed James Spring and Wire Company, which was later renamed James Industries, using just a $500 loan. They had 400 Slinky units made by a local machine shop, hand-wrapped each in yellow paper, and priced them at $1 a piece. Each was 2½ inches tall, and included 98 coils of high-grade blue-black Swedish steel. At first, the James couple had difficulty selling Slinky to toy stores but, then in November 1945, they were granted permission to set up an inclined plane in the toy section of Gimbels department store in Philadelphia to demonstrate the toy. Finally, the Slinky was a hit, and the first 400 units were sold within ninety minutes. In 1946, Slinky was introduced at the American Toy Fair. The Slinky was without doubt a huge success, yet in it’s humble beginnings, it was an accident.