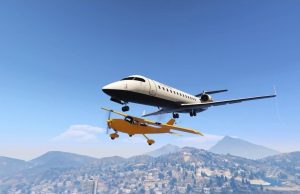 Just like cars, planes have blind spots too. It makes sense, and in reality, the blind spots on planes make the blind spots in cars seem so much less significant. It makes no difference really, because during a crash the result is catastrophic. Of course, there is a better chance, in a collision, to survive in a car than a plane. Of course, it depends on how bad the crash was and where, as to what chances there are of survival in car or plane.

On Monday, September 25, 1978, Pacific Southwest Airlines (PSA) Flight 182 departed Sacramento for San Diego, with a stop in Los Angeles. Flight 182 was a Boeing 727-214 commercial airliner, registration, N533PS. The seven-person, San Diego-based crew consisted of Captain James McFeron, who was 42; First Officer Robert Fox, who was 38; Flight Engineer Martin Wahne, who was 44; and four flight attendants. The flight from Sacramento to Los Angeles went smoothly. At 8:34am, Flight 182 departed Los Angeles. First Officer Fox was the pilot flying. There were 128 passengers on board, including 29 PSA employees. The weather in San Diego that morning was sunny and clear with 10 miles of visibility. It was an ideal day to fly.

At 8:59 a.m., the approach controller alerted the PSA crew about a small Cessna 172 Skyhawk aircraft nearby. 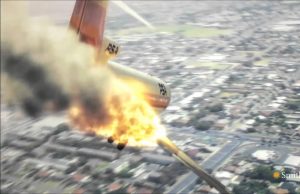 The Cessna was being flown by two licensed pilots. One was Martin Kazy Jr, who was 32. He possessed single-engine, multi-engine, and instrument flight ratings, as well as a commercial certificate and an instrument flight instructor certificate. He had flown a total of 5,137 hours. The other, David Boswell, who was 35. He was a US Marine Corps Sergeant. He possessed single-engine and multi-engine ratings and a commercial certificate. Boswell had flown 407 hours at the time of the accident. He was practicing under Kazy, intent on achieving his instrument rating.

The men in the Cessna had departed from Montgomery Field and were navigating under visual flight rules, which did not require the filing of a flight plan. As is common while learning instrument flying, Boswell was wearing a “hood” to limit his field of vision straight ahead to the cockpit panel, much like an oversized sun visor with vertical panels to block peripheral vision. At the time of the collision, the Cessna 172 light aircraft, registration, N7711G was on the missed approach (in visual meteorological conditions) from Lindbergh’s Runway 9, heading east and climbing. The Cessna was in communication with San Diego approach control. The Cessna came up from below the Boeing 727. The PSA plane failed to keep track of the Cessna, or report losing sight of it when it moved into the blind spot. It was a recipe for disaster. The larger plane virtually ran over the 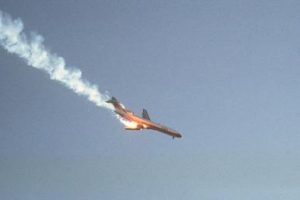 smaller plane over San Diego, California, at 9:01am.

Both aircraft crashed into North Park, a San Diego neighborhood. Flight 182hit a house, and impacted the ground just north of the intersection of Dwight and Nile, killing all 135 people aboard the aircraft and seven people on the ground in houses, including two children. The Cessna impacted on Polk Av between 32nd St and Iowa St killing the two on board. Nine others on the ground were injured and 22 homes were destroyed or damaged by the impact and debris. It was Pacific Southwest Airlines’ first fatal accident.