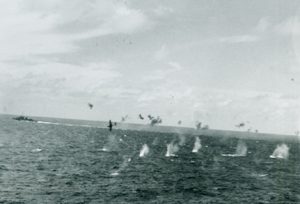 Some of the biggest defeats in any war come from underestimating the enemy or refusing to believe the facts. In the case of Japan it was a little of both. The security of the Marianas Islands, in the western Pacific, was vital to Japan, which had air bases on Saipan, Tinian, and Guam. The United States troops were already battling the Japanese on Saipan, since their arrival there on June 15, 1944. Any further intrusion would leave the Philippine Islands, and Japan itself, vulnerable to US attack. The Japanese needed to maintain their security in the Marianas Islands.

The US Fifth Fleet, commanded by Admiral Raymond Spruance, was on its way northwest from the Marshall Islands. Their mission was to provide backup for the invasion of Saipan and the rest of the Marianas. Whether he knew what was going on or not, 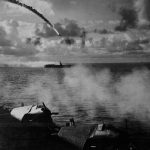 Japanese Admiral Ozawa Jisaburo, decided to challenge the American fleet. He ordered 430 of his planes, launched from aircraft carriers, to attack. The greatest carrier battle of the war was about to begin. The United States picked up the Japanese craft on radar and shot down more than 300 aircraft and sunk two Japanese aircraft carriers. By comparison, the United States only lost 29 of their own planes in the process. Strangely, Admiral Ozawa, believed that his missing planes had landed at their Guam air base. He maintained his position in the Philippine Sea, allowing for a second attack of US carrier-based fighter planes. He made his men sitting ducks!! The secondary attack, commanded by Admiral Mitscher, shot down an additional 65 Japanese planes and sink another carrier. In total, the Japanese lost 480 aircraft…about three-quarters of its total aircraft, not to mention most of its crews. American would dominate the Marianas Islands, and Japan was in deep trouble. The battle was later described as a “turkey shoot.”

Not long after this battle at sea, US Marine divisions penetrated farther into the island of Saipan. Two of the 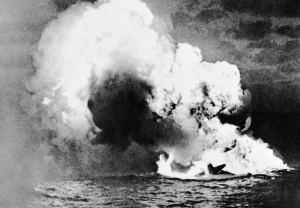 Japanese commanders on the island, Admiral Nagumo and General Saito, both committed suicide in an attempt to rally the remaining Japanese forces. I can’t imagine how that would inspire the forces. It was an act that can only be understood by a sick mind, but their plan worked. Those forces also committed a virtual suicide as they attacked the Americans’ lines, losing 26,000 men compared with 3,500 lost by the United States. Within another month, the islands of Tinian and Guam were also captured by the United States. Due to the disgrace, the Japanese government of Premier Hideki Tojo resigned at this stunning defeat, in what many have described as the turning point of the war in the Pacific.