After reading about the rescue of Allied personnel from occupied France by smuggling them through Spain and then to the Rock of Gibraltar, I wanted to know more about this place. The story talked about the tunnels that basically created an underground city in the Rock of Gibraltar. The Rock was basically a huge underground fortress capable of accommodating 16,000 men along with all the supplies, ammunition, and equipment needed to withstand a prolonged siege. The entire 16,000 strong garrison could be housed there along with enough food to last them for 16 months. Within the tunnels there were also an underground telephone exchange, a power generating station, a water distillation plant, a hospital, a bakery, ammunition magazines and a vehicle maintenance workshop. Such a place in World War II would be almost impossible to penetrate with the weapons available in that day and age.

The tunnels of Gibraltar were constructed over the course of nearly 200 years, principally by the British Army. Within a land area of only 2.6 square miles, Gibraltar has around 34 miles of tunnels, nearly twice the length of its entire road network. The first tunnels were excavated in the late 18th century. They served as communication passages between artillery positions and housed guns within embrasures cut into the North Face of the Rock, to protect the interior city. More tunnels were constructed in the 19th century to allow easier access to remote areas of Gibraltar and accommodate stores and reservoirs to deliver the water supply of 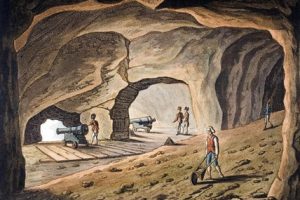 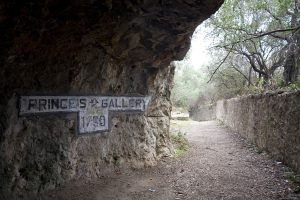 Gibraltar. At the start of World War II, the civilian population around the Rock of Gibraltar was evacuated and the garrison inside the facility was greatly increased in size. A number of new tunnels were excavated to create accommodation for the expanded garrison and to store huge quantities of food, equipment, and ammunition. The work was carried out by four specialized tunneling companies from the Royal Engineers and the Canadian Army. They created a new Main Base Area in the southeastern part of Gibraltar on the peninsula’s Mediterranean coast. It was chosen because it was shielded from the potentially hostile Spanish mainland. New connecting tunnels were created to link this with the established military bases on the west side. A pair of tunnels, called the Great North Road and the Fosse Way, were excavated running nearly the full length of the Rock to interconnect the bulk of the wartime tunnels.

It was to this place that the French Resistance smuggled downed Allied airmen and other escapees from the Nazi regime inside France. Men like Staff Sergeant Arthur Meyerowitz and RAF Bomber Lieutenant R.F.W. Cleaver…two of the men who were smuggled out of occupied France by the French Resistance network known as Réseau Morhange which was created in 1943 by Marcel Taillandier in Toulouse. Taillandier was killed shortly after these two men were smuggled out. He had given his life to protect the airmen he smuggled out as well as to provide intelligence to England. For the airmen who made it to the Rock of Gibraltar, freedom awaited. While 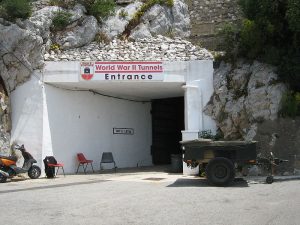 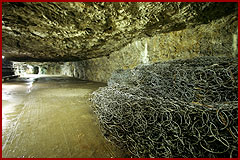 the road had been long and hard, the time spent at the Rock of Gibraltar meant safety, medical care, food, and warmth. It meant being able to let their family know that they were alive. It meant being able to go back to life, and maybe for some, to be able to live to fight another day. As the men were told upon arrival at the Rock of Gibraltar, “Welcome back to the war.”

One Response to Inside Gibraltar