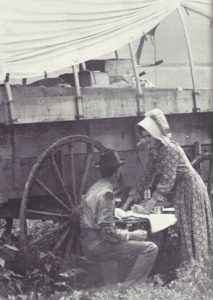 When we think of the Old West, the Pioneer movement, the Gold Rush, and generally, the settling of the United States, our minds immediately go to the brave men who fought the Indians, ran the wagon trains, weathered the harsh winters looking for their fortunes, and fought in the wars to make this a free nation, but seldom do we think of the anonymous heroes of that time…the women. There is a saying, “Behind every great man there’s a great woman.” that saying is one reference to the many women who have set aside their own comforts to support their man in the goals and dreams he has. In many ways that saying is the picture of the Pioneer woman, but it actually leaves something out. Just because her man did not become famous, doesn’t mean that the woman was any less behind him, supporting him in all he did.

Pioneer women were there, on the home front, working hard all day trying to keep their house clean in a rugged windswept frontier. Her floors were often made of dirt, and yet she swept them. The water came from a well, or a nearby creek, and she had to haul it into the house, because her man was off hunting to bring in food for the family. The house was crudely constructed with logs and often had a sod roof, and she was right there working like a man beside her husband to get that house built. She watched over the children, and kept them safe from the many perils that were a daily encounter. From snakes, to bears, to mountain lions, to Indians, she did what she needed to, even to the point of handling a gun as well as her husband did. And yet, history looked at her as the weaker part of the partnership, the one who needed to be sheltered and protected. History looked at her as if she could not 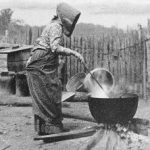 even bear to hear about certain things, because they might be too upsetting to her. In reality, they had vastly underestimated their women.

When the men got hurt, and the garden needed to be cared for, the women would till the ground…fighting with the tiller behind a horse, and winning the battle. These women took care of the house, the children, the sick or injured husband, and the garden or other crops, all without batting an eye. These women knew all about the hardships of frontier living, and when the going got tough, they didn’t turn and run back east. When the Indians attacked, they stayed and fought with their men. They could not afford to hide in a cellar, their hands were needed to hold a gun. They even faced the Indians alone, when their men were away, becoming excellent negotiators, who were able to make a trade of their wares that, in the end saved their own lives and the lives of their families. They were determined to make this new frontier work, and for the most part, they did it all without making a name for themselves. Sometimes, when we look up ancestors in historic archives, these women are either listed only as Mrs, acknowledging only the husband’s name, or they were listed only as the wife of their husband. Their true identity sometimes remains forever a mystery, and yet, they were heroes…but, they were anonymous heroes. The great men they stood behind, thereby making these men successful, may have been heroes of the frontier, and their name may have been one that every history book told us all about, 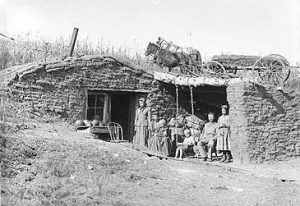 but their wives, who worked quietly beside them, remained unknown. We knew about the exploits of the men, the towns they founded, the travels they made exploring ever westward, but the women who were there with them, cooking the meals while the men talked, cleaning up afterward alone, delivering their babies often with only the help of their husband, carrying a baby, while weeding a garden, and feeding their family before themselves, going hungry, if necessary, to make sure the family was taken care of…these women rarely made the history books. Their job must have seemed to mundane to be considered adventurous, but without their contribution, this nation would not have become the great Republic that it is.