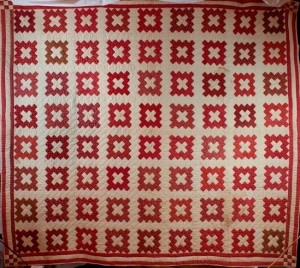 On September 22, 2016, I was contacted by a man on Ancestry.com who told me that we were researching some of the same people. He said they were people who had signed the famous Snyder Friendship Quilt. Well, since I had never heard of it before, I wasn’t too sure how famous it was, but his question intrigued me, so I had to check it out for myself. I looked at the site he sent me to, and I was very intrigued. The quilt was a known as a friendship quilt, and they were quite popular in times past. This quilt, called the Snyder Quilt, is made with varying red floral tones and white contrast. It has 72 blocks in it. The thing that makes it a friendship quilt is that the friends of the quilter write their name on the blocks. On this quilt, 63 of the 72 blocks have signatures.

For me, there were two things that I found exciting. The first was that eleven of the signatures had the last name Shaw, which is one of the family names in my mom’s family history. I knew that I would be researching those people to see if we are related. The second thing that was exciting is that there were three signatures of famous people…”Abraham Lincoln President of US America 1865″, “Mrs Abraham Lincoln”, and “General US Grant” had each signed a quilt block. At this point, my mind was racing. I wondered if the Shaws on the quilt 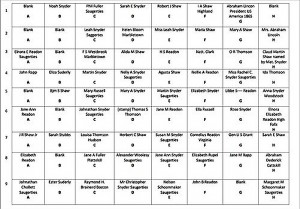 could be family, and how well they knew President Lincoln, who has always been a man who interested me. That was almost a year ago.

The names that are repeated several times are Snyder, Shaw, and Readon. Some of the other last names on the quilt are Thomson, Russell, Fuller, Suderly, and Schoonmaker. The name Snyder is on the quilt thirteen times and the name Shaw appears eleven times. All of the different names on the quilt got my family history wheels turning, and I knew I would have to get busy and find out if any of the people who had signed the quilt were people who were related to us. My research would prove quite fruitful, but as with any research of one’s ancestry, the going was slow. I really expected to find the connection to the Shaw side of the family, and I think I will at some point, but what really surprised me was that I found out the Abraham Lincoln is my 7th cousin, 3 times removed; and that Mary Todd Lincoln is my 4th cousin 4 times removed; both on the Spencer side of my family!!

There is some speculation as to whether the Lincoln signatures are authentic, and I can see why. On the quilt, Abraham Lincoln is spelled Abraham Lincon. I’m not going to try to debate the authenticity, but I will go so far

as to say that since my job requires me to sign my name multiple times during the day, I have actually signed my name so quickly that I have misspelled it, and had to insert a letter into it. I know that sounds odd, but try signing your name over and over for years, and see if you don’t make a mistake or two. By this time, Lincoln was the President of the United States, and so had to sign his name a lot too. You can believe what you want to, but I have chosen to believe that the Snyder Quilt is authentic, because I can’t see any purpose in the Snyder family lying about it. Their friends would know the truth, and the quilt would have had no real value.