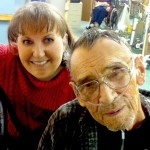 As my father-in-law’s life was winding down, we spent a lot of time together. It wasn’t always the perfect moments of his life that we shared, because he was in the hospital off and on during that time. He hated going into the hospital…hated the equipment he had to be hooked up to, food they wanted him to eat, and the constant waiting to get up, because he had to have help, but he liked the nurses and aides, and that made it tolerable, I guess. Nevertheless, he hated to be there, because life just seemed to pass him by when he was in the hospital. Still, since I needed to be there to talk to the doctors, and since I worked nearby, I went up several times a day. I know it meant a lot to him.

When we would first go to the hospital emergency room, my father-in-law would always ask me to take care of his watch and pocket knife. They were so important to him. That almost 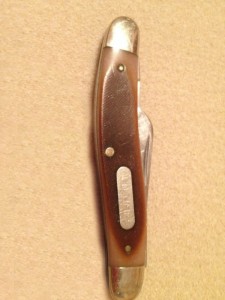 seems strange, because he normally didn’t have to be anywhere at any certain time, and he very seldom ever used the pocket knife. Nevertheless, they were very important to him, and I was always entrusted with their care, and because it was so important to him, it became important to me. When he passed away, the watch and pocket knife were not claimed by any of his children, so once again, I have been entrusted with their care. They are a treasure to me, and each time I look at them, I can see his sweet face, a little worried about what this hospital visit was going to bring, and yet still so protective of those two prized possessions.

I don’t know if they were given to him, or if they were just something he liked and bought for himself, but in his last days, and probably even longer than that, I know that they meant a lot to him. The knife is an Old Timer Knife. Old Timer Knives were manufactured by the Imperial Schrade Corporation, who closed their doors July 30, 2004, after 100 years of business. They were something he looked on as being of great value. It 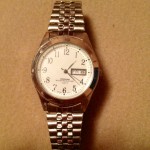 might have been just a guy thing to have a pocket knife or something, because it does seem that a lot of guys have and keep good track of their pocket knives. I don’t know the story on his watch either, except to say that the only time he was without it was when he was in the hospital, in bed, or the shower. That says that it was something he treasured too. Neither of these were very expensive items. The watch may have come from Walmart, for all I know. It’s monetary value isn’t important to me. It’s real value is in what it meant to my father-in-law. Today would have been my father-in-law’s 85th birthday. Happy birthday in Heaven, Dad. We love and miss you very much.

4 Responses to Of Great Value