These days, with most towns having multiple schools, our school days are often taken for granted, and even viewed…by many students and boring, grueling, and basically something to get through and over with, so they can move on to real life. But, schooling in the old west, and even into the mid 1900’s wasn’t always such an easy thing to accomplish. As our nation grew, and people spread out across its vastness, schools were one thing in short supply. Many parents had to home school their children, which is becoming more of a luxury item these days, because with home schooling, comes the loss of one income, and many people can’t or don’t want to make it on one income.

When my great grandparents, Carl and Henriette Schumacher moved their family from Minnesota to North Dakota, they were quite a way from the school, but they saw the importance of educating their children. The family spoke German at home, and when the older children started school, the teachers made fun of their lack of the knowledge of the English language. Henriette immediately set out to change that. German would no longer be spoken in the home. The whole family would make the switch to English. The distance to school was a big problem, but Carl made sure that his children were there…no matter what.

That worked well for the older children, but at that time in history, many children didn’t go to school after the 6th grade, and some quit sooner. So, when Bertha and Elsa, the youngest children were in school, a new problem presented itself. The school was nearer to them now, but often there were not enough students to warrant keeping it open, thus their education became hap-hazard. That is not to say that they did not get their education, because they did, and even went on to college. Theirs was just a little bit different than their older siblings.

Bertha tells of going to school in the small school, with very few students, but she also talks of the year they were home schooled but their oldest sister, my future grandmother, Anna. She talks of the time that they spent in a small house in Lisbon, with Mina staying with them so they could go to school. And of course, there were the times they went by horse and buggy into school. Those were hard times, and I have to wonder how the girls kept up with the other students, and were able to continue on to the high school in Lisbon. It’s not that I wondered about my grandmother’s ability to teach, but with little or no regulation, how did the school in Lisbon know anything about their prior education. 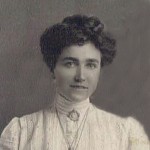 I suppose they had to take some kind of test or visit with the teacher for a time so they could determine where they were in their education, and therefore could be placed in one grade or another. I know that often in homeschooling situations today, the students are ahead of their age group, but I still wonder if that was the case then, because their materials were few and there was really no clear way to know if the teacher was keeping up with other classes for their pupils’ age groups. Those must have been hard and confusing times for Bertha and Elsa. Nevertheless, they both finished school, like their older siblings, and went on to college, but their education was definitely at The School of Hap-Hazard.