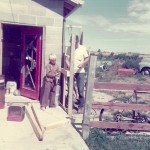 Little boys want so much to be just like their daddy. They want to do whatever their daddy is doing. Most times they aren’t much help until they are older, but if their dads don’t let them help when they are little, they most likely won’t want to when they are older. It is a challenge for those dads to find suitable jobs for those little boys though. Sometimes all they can do is point to a tool so they can get it for them. It would be much easier for that dad to do the job himself, but that would break his little boy’s heart, and he can’t have that. Of course, as those little boys eventually learn the ropes, and they can become pretty good hands, if they still want to help by that time. A kid with a little training, can learn to figure out complex problems, but a kid with no training, will have a much harder time. So, a good dad will let their little boys help out so they can learn, even 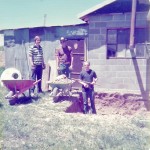 if it would be easier to do it themselves, and even if their little man gets annoying at times.

Bob’s dad, my father-in-law, had two sons, and while I can’t say how Bob was as a helper when he was as a little guy, I do remember that Ron, while probably the same as Bob, was a bit of a trial. The men needed to get things done, and yet here was Ron…wanting to help. Bob was born 14 years before Ron, so by this time he and his dad worked very well together. Ron just wanted to be like his dad and his big brother. They tried to let him help as much as possible, but some of the work they were doing was too dangerous for Ron, and some of it was too complex. I’m sure it was frustrating for Ron, and the times I witnessed, I think it probably hurt his feelings some too. That made me feel bad, but then 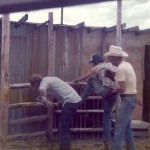 his dad would find a job to do that Ron was able to help with, and that made things a whole lot better.

As the years went by, both of the boys became their dad’s right hand man, excelling in different kinds of work at different times in his life. He very seldom had to hire work done, because if he couldn’t do it, his boys probably could. In fact, the three of them, along with grandsons Barry, JD, and Eric were usually more than enough to get any job done. Yes, even if training the littlest helpers can be frustrating at times, it usually ends up being the best move you can make.