Airplanes Through The Years 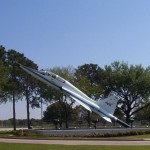 So much has changed in the area of aviation over the years. I’m quite sure that the Wright brothers would be amazed. One thing that hasn’t changed since those first airplanes, however, is our interest, or in some cases obsession with flight. Many places around the country have displays of actual planes that are low enough to the ground to get you up close and most of these are displayed right beside entrances to memorials or other sights that are about flight. Planes, perched on a pole, give us the ability to stop and take pictures that we can use as a memory of our visit to the site. 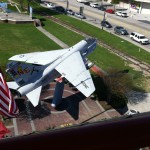 Bob and I have made several of these stops to get pictures with an airplane of one type or another, and now looking back, I see that my parents and grandparents liked to do the same thing. There is just something about flight…the feeling of freedom, that draws us to it, but what really fascinates me is the changes in the planes over the years. If the Wright brothers were here, and a helicopter or a Harrier Jet took off, I’m sure they would stand there staring with their mouth wide open. The speed it took just to get their plane in the air for a few minutes compared to the lack of speed to get these in the air would be shocking. 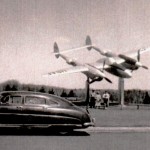 When you compare the fighter planes of the past to those of today…well, just imagine if America had today’s planes in World War II. The war would have been over after one battle. No other nation would have been able to hold us off. The passage of time has brought new technology to the levels of being very dangerous in the wrong hands. I suppose it is a good thing that it came about slowly, so we could adjust our way of thinking. Still, craziness knows no generation, and there are always those who would start a war. And just a side note, be sure to take a good look at the cars in the first and last picture. Much has changed in the auto industry too…but, that is another story.

2 Responses to Airplanes Through The Years