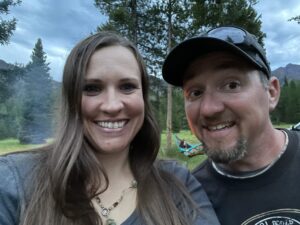 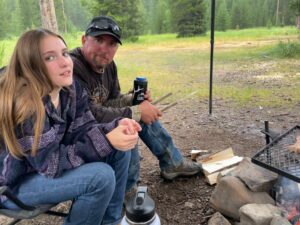 My nephew, Josh Griffith, who is married to my niece, Susan Griffith, has had a busy summer, and that means that they haven’t been able to go camping as much as they would have liked. They only got to go a couple of times in June and July, and for a camping family, that just isn’t enough. So, before summer officially ends and the weather gets cold, they are trying to go every chance they get. Anyone who has made the preparations to go camping, knows that just getting there is a lot of work. Then, once you’re there, camping is also a lot of work. It’s not like getting in a car, driving to a hotel, eating meals out, and then going back to the room to relax. Camping is chopping the wood for the fire, preparing all your food, cleaning up the dishes, making your own beds, and then doing it all again the next day. I guess that’s why we don’t go camping. When we go on trips, we hike and then eat out and relax in our motel room. I figure the hiking makes up for the lack of work camping, haha!! Susan said that she sometimes wonders if it’s all worth it…and I get it, but the next time they are out in the mountains and totally unplugged, Susan knows it’s worth it after all.

Many times, the family goes to the Big Horn Mountains, but this year they have only been there once. The rest

of the time they have been going to the Beartooth Mountains, that border Montana and Wyoming. Going to the Beartooth Mountains is a lot more work, because they have to keep their camp super clean, and make enough noise to ward off the bears in the area. Susan calls it being “bear aware” and that makes sense. She tells me they definitely don’t have any trouble making noise, and if that keeps the bears away, I wouldn’t either. What they are doing must be working, because out of the 19 years they have been camping in the Beartooth mountains, they have never had an encounter with a bear, and I’m praying they never will. After a couple more camping trips, they will go back up a couple more times for firewood.

Then, it will be time to start hunting season. This year’s hunting trip will be special, because Josh is taking their daughter, Kaytlyn on her first hunting trip on horses this year. They have been trying to get the horses in shape and ready for hunting. Josh and Kaytlyn are really looking forward to the trip. They got a young horse this last winter. Hes only about 4 or so, and not broken yet. Josh has been trying to break him and plans to ride him for hunting season. Susan says it’s pretty interesting watching that unfold and hoping no one gets hurt. Susan says, “You never know when there’s going to be a rodeo. Haha!!” When I said that I didn’t know Josh broke horses, she said that he really doesn’t, but they just don’t want to pay to have someone else do it. At which 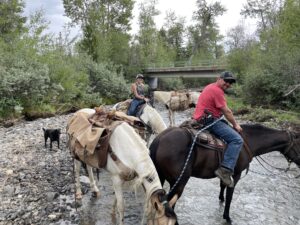 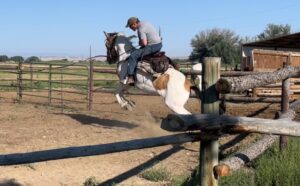 point, I said, “Josh does break horses then!!” The horse came to them with the name Dudly, but they just didn’t like the feel of that name. The horse is a Tennessee Walker, so they changed his name to Tennessee Whiskey. That’s much more distinguished, for sure. Tennessee Whiskey sure is a pretty horse. Today is Josh’s birthday. Happy birthday Josh!! Have a great day!!