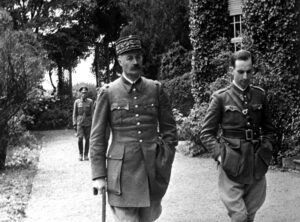 Henri Honoré Giraud was a French general and a leader of the Free French Forces during the Second World War until he was forced to retire in 1944. Giraud was born on January 18, 1879 the son of Louis and Jeanne (née Deguignand) Giraud. His father was a coal merchant. Born to an Alsatian family in Paris, Giraud graduated from the Saint-Cyr military academy and served in French North Africa. During World War I, Giraud was wounded and captured by the Germans, but managed to escape from his prisoner-of-war camp. It was the first time he escaped, but not the last. After World War I ended, Giraud returned to North Africa and fought in the Rif War. During that war, he was awarded the Légion d’honneur. The Légion d’honneur (or Legion of Honour) is the highest French order of merit, both military and civil. It was established in 1802 by Napoleon Bonaparte, and it has been retained by all later French governments and régimes.

When World War II began, Giraud was a member of the Superior War Council. He strongly disagreed with Charles de Gaulle about the tactics of using armored troops that were planned. Giraud was made the commander of the 7th Army when it was sent to the Netherlands on May 10, 1940. He was able to delay German troops at Breda on May 13th. The badly depleted 7th Army was then merged with the 9th Army. While the troops were trying to block a German attack through the Ardennes, Giraud was at the front with a reconnaissance patrol when he was captured by German troops at Wassigny on May19th. A German court-martial tried Giraud for ordering the execution of two German saboteurs wearing civilian clothes, but he was acquitted and taken to Königstein Castle near Dresden, which was used as a high-security POW prison. He would be held there for two years.

Not one to just sit around, Giraud began carefully planning his escape. He learned German and memorized a map of the area. He painstakingly made a 150 feet rope out of twine, torn bedsheets, and copper wire, which friends had smuggled into the prison for him. Using a simple code embedded in his letters home, he informed his family of his plans to escape. I doubt if they were surprised, as it would not be the first time he escaped his captors. Finally on April 17, 1942, he was ready. Königstein Castle was built on a hilltop, with steep cliff on one side. After shaving off his moustache and covering his head with a Tyrolean hat to disguise himself, Giraud lowered himself down the cliff of the mountain fortress. He discretely travelled to Schandau where he met his Special Operations Executive (SOE) contact, who provided him with a change of clothes, cash, and identity papers. Thus began the series of tactics designed to get Giraud to the Swiss border by train. By now, the border guards had been informed of his escape and were on the alert for him. Giraud walked through the mountains until he was stopped by two Swiss soldiers, who took him to Basel. Eventually, he was able to slip into Vichy France, where he was finally able to make his identity known. He tried unsuccessfully to convince Marshal Pétain that Germany would lose, and that France must resist the German occupation. His views were rejected, but at least the Vichy government refused to return Giraud to the Germans. Returning him would have been a death sentence, because Hitler had ordered Giraud’s assassination upon being caught. Giraud went to North Africa via a British submarine, and joined the French Free Forces under General Charles de Gaulle. He eventually helped to rebuild the French army.

In January 1943, Giraud took part in the Casablanca Conference along with Charles de Gaulle, Winston Churchill, and Franklin D Roosevelt. Later in the same year, Giraud and de Gaulle became co-presidents of the French Committee of National Liberation, but Giraud lost support and retired in frustration in April 1944. After 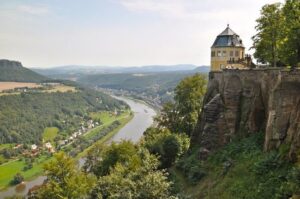 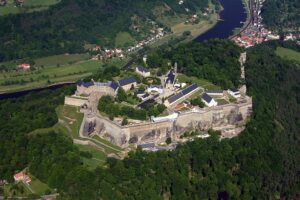