As the Third Reich was losing its war against the world, German General Friedrich Paulus, who was commander in chief of the German 6th Army at Stalingrad, urgently requests permission from Adolf Hitler to surrender his position there. Paulus knew they had no chance, but Hitler refused. Of course, we all know that Hitler was insane. He would make his men fight to the death when there was no hope of winning the battle.

Stalingrad was a prized strategic area, and the battle to take the city began in the summer of 1942. German forces assaulted the city, which was a major industrial center, but they had misjudged the Soviets. Despite repeated attempts and having pushed the Soviets almost to the Volga River in mid-October, as well as encircling Stalingrad, the 6th Army, under Paulus, and part of the 4th Panzer Army could not break past the adamantine defense of the Soviet 62nd Army. As their resources diminished. The Germans suffered diminishing resources, partisan guerilla attacks, and the cruelty of the Russian winter, all of which began to take their toll on the Germans. The Soviets made their move on November 19, launching a counteroffensive that began with a massive artillery bombardment of the German position. The assault began when the Soviets attacked the weakest link in the German force-inexperienced Romanian troops. Soviet soldiers took 65,000 soldiers prisoner that day. Then, the Soviets in a bold strategic move, encircled the enemy and launched pincer movements from north and south simultaneously, just as the Germans were encircling Stalingrad. It was at this point that the Germans should have withdrawn, and Paulus requested permission to withdraw, but Hitler wouldn’t allow it. He told his armies to hold out until they could be reinforced. Fresh troops would not arrive until December, and by then it was too late. The Soviet position was too strong, and the Germans were exhausted. They were out of options.

By January 24, the Soviets had overrun Paulus’ last airfield. His position was indefensible and surrender was the only hope for survival. Paulus urgently requested, “Let us surrender!!” Still, Hitler wouldn’t hear of it: “The 6th Army will hold its positions to the last man and the last round.” Paulus held out until January 31, when he finally surrendered. Of more than 280,000 men under Paulus’ command, half were already dead or dying, 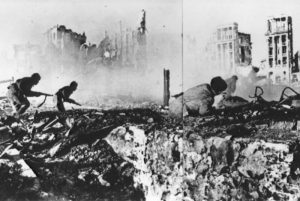 about 35,000 had been evacuated from the front, and the remaining 91,000 were hauled off to Soviet POW camps. Paulus eventually sold out to the Soviets altogether, joining the National Committee for Free Germany and urging German troops to surrender. Testifying at Nuremberg for the Soviets, he was released and spent the rest of his life in East Germany. Hitler was crazy, and his officers knew it, but there was little they could do about it.