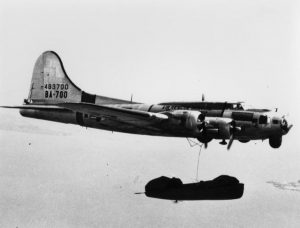 B-17H Flying Fortress Serial Number 43-38882, aka Jukebox 21, took off from Motoyama Number 1 Airfield on Iwo Jima, on July 25, 1945, on a night search mission for F4U Corsair 81319 that crashed the day before near Arai at roughly over Lat 34° 35′ N, Long 137° 35′ E on the southern coast of Honshu, Japan. The weather was good, and yet Jukebox 21 was lost, without making a distress signal. That fact made the circumstances of the crash hard to figure, and only known when the B-17 failed to return. The crew was officially listed as Missing In Action, and later as killed in action. 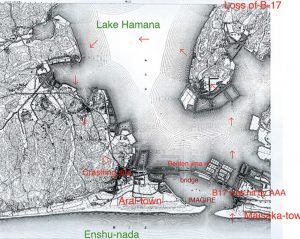 The B-17 flew over Maisaka near the Benten Jima bridge, flying northward at an altitude of roughly 984 feet. Crossing the coast, 75mm anti-aircraft guns on the south side of the highway at Benten Jima opened fire on the bomber. Jukebox 21 was hit by anti-aircraft fire, one of the engines began smoking as the plane flew northward, then attempted to circle to the west over Lake Hamana, then southward. Trailing black smoke, one of the engines on the right wing broke off before the bomber crashed at Yakute to the northwest of Arai. Jukebox 21 impacted pine trees before crashing into the ground nose first at Yakute, to the northwest of Arai. Immediately after the crash, Japanese civilians ran to the crash site and observed several mounds of debris and fire and observed the rescue boat in the wreckage. There were no survivors. Thirty minutes after the crash, Japanese Keibodan (wartime guards) reached the crash site and extinguished the fire. The bodies of the ten crew were recovered, all badly burned from the fire and no identification was possible. Afterwards, the bodies of the crew were cremated and buried at the nearby Arai crematorium, along with the body of the Corsair pilot that crashed the previous day. 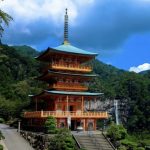 Twelve Allied aircraft participated in a search over two days under the direction of Major Ivan K Mays. No wreckage was located, and all stations and ships were told to be on the lookout for this bomber. On May 22, 1947 US Army investigators visited Arai to investigate the possibilities of any atrocities in connection with the death of this crew, but found none. During their visit, they interrogated Katsumi Kumagai the former Kempei Tai commander for Arai who explained how the B-17 crashed and how the crew’s bodies were recovered, cremated, and buried. Afterwards, the remains of the crew were recovered and transported to the United States for permanent burial. Somewhat strangely, the Japanese placed a memorial to the men of Jukebox 21 at the Jingu-ji Temple in Kosai, Japan.