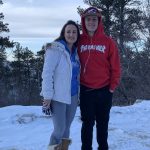 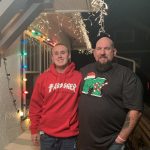 My grand nephew, Xander Spethman like most kids this year, had a challenging school year. He had never planned to be homeschooled. He was used to having his friends around him and all the activities at school. He was used to some level of independence that going to high school offered. Then, suddenly he was at home with his siblings. His parents were often at work, so that also left Xander in charge sometimes. In many kids Xander’s age, that many hours with the younger siblings might have made life miserable for all concerned, but Xander is a kind-hearted young man. He loves his siblings, and they look up to him. Xander tried to be a lead-by-example kind of person. That makes for a much more harmonious household, whether the parents are there or not.

Xander and his brother, Zack have become best friends. They share a love of long boarding, and now they go 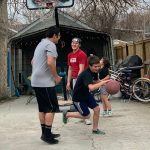 as often as they can. He is also sweet to his other siblings, Isaac, and little Aleesia, who thinks her brothers “hung the moon,” a fact that is obvious by the way she looks at them. Xander is a very loyal person. He is also protective of his family. He is an amazing big brother, who always takes time to help with whatever his little brothers and sister need. Xander has demonstrated many leader qualities, that have been beneficial to his siblings and his friends alike. Xander’s mom, Jenny attributes those attributes to being the oldest child, but I disagree. Being the oldest doesn’t guarantee leadership. Those leadership qualities come from several sources, not the least of which is good parental upbringing. It also comes from something inside a person that says, “This is the right thing to do, and that is not.” It is about being settled in the right things to do, and it’s having a determination to do what is right, even if it is the harder road. Xander has that determination, and his family has become the beneficiary of those good leadership qualities. They are very proud of him.

Xander is a very good example not only to his family, but also to his friends. The leadership qualities Xander 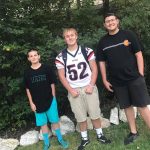 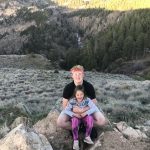 displays to his friends, cause many of them to seek him out when they need advise. Unlike many situations where kids are advising kids, which can be catastrophic in their misguided advise, Xander is a very good counselor to his friends. He has a strong sense of right and wrong, and doesn’t like it when he sees anyone being mistreated…a very important quality in a time when “bullying” has become the norm in schools. He always helps anyone who asks and tries to look out for everyone. That is the kind of friend, and brother, everyone is proud to know. Today is Xander’s 17th birthday. Happy birthday Xander!! Have a great day!! We love you!!