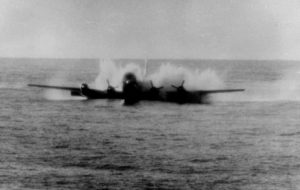 Very few people these days haven’t heard of Captain Chesley B. “Sulley” Sullenberger III and co-pilot Jeff Skiles who made their now famous landing on the Hudson River in New York City after a bird strike left them powerless. We all know that everyone “miraculously” survived that crash landing. It was an undeniable miracle, but it was not the first time such a thing had happened. On October 16, 1956, Pan Am Flight 6, a Boeing 377 Stratocruiser on a nighttime flight from Honolulu to San Francisco, developed engine trouble in one and then two of its four engines. Pan Am Flight 6 was about halfway across the Pacific Ocean at the time and the malfunctioning engine propeller sent the airplane into a descent. I can only imagine the thoughts racing through the minds of the pilots, given the fact that they were not going to find a highway or a field on which to land safely. There was only ocean. This was not the first time a plane had to ditch in the ocean, but I doubt that was any comfort to the men who were flying the plane, since the other ditching events had fatalities.

Pan Am World Airways first started flying in 1927, delivering mail between Florida and Cuba. The carrier was based out of New York City for nearly 30 years, until it went out of business in 1991. The airline left a legacy of firsts. “It was first across the Atlantic, first with flights across the Pacific and the first to offer around-the-world service,” said Kelly Cusack, the curator of the Pan Am Museum Foundation. Most airlines celebrate a lot of their firsts, but there is one first that no airline wants to celebrate, or have on their list of firsts at all…a crash. Nevertheless, on October 16, 1956, a crash was exactly what was going to happen. This crash took place 53 years before “Sulley’s” famous water landing into the Hudson River. “This is a particularly memorable and a proud part of our legacy because of two words: happy ending,” said Jeff Kriendler, who was Pan Am’s vice president for corporate communications in the 1980s and has written several anthologies about the airline. Airlines have ditched in the ocean before, but this was the first to do so with no fatalities. Like “Sulley’s” famous flight, ditching in the ocean without fatalities…was unheard of. Unlike “Sulley’s” landing, which was caught on camera, a nighttime flight in the middle of the ocean in 1956 was not likely to be caught on camera.

The flight started out smoothly, but then developed engine trouble in one, and then two of its four engines. Pan 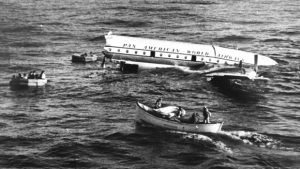 Am Flight 6 was about halfway across the Pacific Ocean at the time and the malfunctioning engine propeller sent the airplane into a descent. The decision to land the plane in the sea with 24 passengers and seven crew members aboard was not made until all other options had been considered. Captain Richard Ogg, the pilot, wrote an account of the episode a year later, saying that he had to weigh many factors. Should he jettison fuel and try to land on the water immediately or fly until daylight provided better visibility? One thing was clear, the bad propeller was causing the plane to burn fuel too fast. He would not make it to San Francisco or Honolulu. Apparently, it was no coincidence that the ship was nearby. In the early days of long flights over water, Coast Guard ships were positioned in the Pacific and the Atlantic Oceans, offering weather information to flight crews and relaying radio messages, according to Doak Walker, a Coast Guard historian who participated in the rescue of Flight 6. In preparation, the cutters were placed near what was expected to be the point of no return. That is the area where a plane would have burned too much fuel to turn back in case of an emergency.

Ogg opted to fly an eight-mile circuit above the Pontchartrain until morning while planning for the water landing. Remembering that during another Pan Am Stratocruiser ditching, the tail had broken off, Ogg had the passengers in the back of the plane move forward and asked those seated by the engine to move as well. “We will try to stay aloft until daylight,” Ogg radioed to the Pontchartrain. When the passengers learned the flight would circle and not attempt to land in the dark, “it gave them a lot of confidence,” said Frank Garcia, 91, the flight engineer and a guest of honor at the Pan Am event. Passengers were also comforted knowing “someone was out there waiting to give them as much aid as they can,” Garcia said. Standing watch on the cutter just after 8 a.m., Walker, 83, recalled that “the seas were extremely calm and the weather was good and we were hoping there wouldn’t be much of a problem.”

Just as Ogg had expected, the tail broke off as soon as the plane hit the sea. Then the nose of the airliner went under the water. “I felt as if somebody had grabbed the seat of my pants and was pulling,” Garcia said. “I saw the water. I was more frightened if the windows broke, then the water would come in.” From the cockpit, 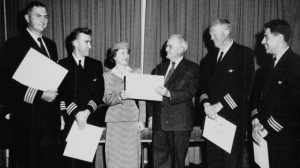 all Garcia saw was water. “I can’t tell you how many seconds, it was less than a minute, and I saw the water receding,” Garcia said, as the front of plane surfaced. On the Pontchartrain many thought they had just witnessed a disaster, Walker said. “It was so sad,” he said. “We knew nobody could survive that.” Rescue boats sped toward the plane, while other Coast Guardsmen filmed the event. Captured moments included life rafts bobbing by the aircraft’s fuselage, transferring survivors to rescue boats, the sinking plane, and the lifting of twin toddlers, Maureen and Elizabeth Gordon, from a lifeboat into waiting seamen’s arms. And, everyone was saved. It was a miracle at sea.

2 Responses to Miracle At Sea