A Difference Of Inches 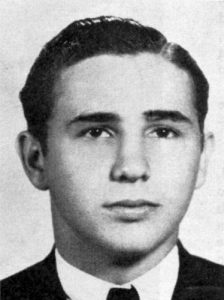 Sometimes, it’s a close call that saves the life of a person, because a difference of inches could have meant the difference between life and death. That was the case for young Corporal Adolf Hitler when he was temporarily blinded on October 14, 1918, by a gas shell that was close enough to temporarily blind him, but unfortunately for the rest of the world, not close enough to kill him. The British shell was part of an attack at Ypres Salient in Belgium, and in the aftermath, Hitler found himself evacuated to a German military hospital at Pasewalk, in Pomerania. Of course, Hitler considered this a great good fortune, with the exception of the temporary blindness. I find myself wishing that the shell had been closer, because the difference of inches could have changed the world, and especially the victims of the Holocaust.

Like many young men of the period, Hitler was drafted for Austrian military service, but when he reported, he was turned down due to lack of fitness. In the summer of 1914, Hitler had moved to Munich. When World War I began, he asked for and received special permission to enlist as a German soldier. It all seemed like a noble thing to do. Hitler was a member of the 16th Bavarian Reserve Infantry Regiment. He traveled to France in October 1914. There, he saw heavy action during the First Battle of Ypres, earning the Iron Cross that December for dragging a wounded comrade to safety. These things rather surprise me, give Hitler’s reputation for thinking only of himself.

Over the course of the next two years, Hitler took part in some of the fiercest struggles of the war, including 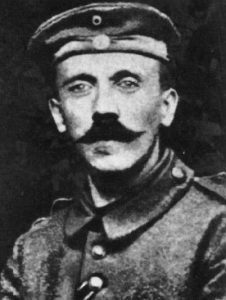 the Battle of Neuve Chapelle, the Second Battle of Ypres and the Battle of the Somme. He was wounded in the leg by a shell blast on October 7, 1916, near Bapaume, France. Following his hospital stay. Hitler was sent to recover near Berlin, after which he returned to his old unit by February 1917. According to Hans Mend, a comrade of Hitler, he was given to rants on the dismal state of morale and dedication to the cause on the home front in Germany. According to Mend, “He sat in the corner of our mess holding his head between his hands in deep contemplation. Suddenly he would leap up, and running about excitedly, say that in spite of our big guns victory would be denied us, for the invisible foes of the German people were a greater danger than the biggest cannon of the enemy.” It would seem that Hitler’s crazed mind was beginning to present itself. As I look at a picture of Hitler as a young man, I wonder what happened to him that changed him so much. Yung Hitler didn’t look like the crazed, evil dictator the world knew

Hitler continued to earn citations for bravery over the next year, including an Iron Cross 1st Class for “personal bravery and general merit” in August 1918 for single-handedly capturing a group of French soldiers hiding in a shell hole during the final German offensive on the Western Front. Then, on October 14, 1918, Hitler received the injury that put an end to his service in World War I. He learned of the German surrender while recovering at Pasewalk. Hitler was furious and frustrated by the news. He said, “I staggered and stumbled back to my

ward and buried my aching head between the blankets and pillow.” Hitler felt he and his fellow soldiers had been betrayed by the German people. I’m amazed that he did not put them in the camps too. In 1941, Hitler as Führer would reveal the degree to which his career and its terrible legacy had been shaped by the World War I, writing that “I brought back home with me my experiences at the front; out of them I built my National Socialist community.”

When I think of what might have been, but for a difference of inches, I find it very ironic. If that shell had hit just a few inches closer, perhaps Hitler would have died a hero in his nation, before he could become the epitome of evil…to the world, and to many of his own people. I suppose World War I and II, as well as the other wars, would have still happened, but maybe, quite likely, the Holocaust would not have happened. Just a few inches. If only.