Not A Very Good Criminal

The Spencer ancestry is riddled with names that have been passed down from generation to generation. So much so, in fact, that it can get confusing when researching one’s ancestry. Common names are William, Robert, Thomas, John, Allen, and Christopher. My dad’s family was no different than any other of the Spencer families. The boys in the family were William, named after his grandfather, William, who had a great grandfather named William, and many more I’m sure. My dad was Allen, who was named after his dad Allen, who was named after his grandfather Allen. And many of the children also used those same names, so there were cousins named William and Allen too. Most of the time it only created problems with the ancestry, mail, school things, and such, but when a man named Ethan Allen Spencer (relation, I’m sure, but just how I don’t know) decided that he needed a little bit of excitement in his life, he decided to go from a law-abiding farm family background to becoming a bank and train robber. Ethan Allen “Al” Spencer was born the day after Christmas in 1887 near Lenepah in Nowata County. He came from a law-abiding farm family. He married and soon was the father of a baby girl. So, why would he abandon all that to become a criminal.

“Al” Spencer became a criminal as the era of horseback riding was coming to an end, and modern motorized criminals were just getting started. That fact, made Spencer an almost forgotten outlaw. Spencer began his career in crime by getting caught stealing cattle in his early 30s. Then in 1919, he and two men burglarized a clothing store in Neodesha, Kansas. Detectives recovered most of the stolen property and arrested Spencer in La Junta, Colorado. The Kansas court convicted and sentenced him to five years in prison. Then the Oklahoma authorities gained custody of Spencer so they could try him on charges of cattle theft. Spencer pleaded guilty and was sentenced to three to 10 years in the Oklahoma penitentiary at McAlester. He began serving his sentence in March 1920. If you ask me, he should have stuck to farming, because he wasn’t very good at crime. Spencer became friends with another convict named Henry Wells and learned a great deal about crime…becoming better, I suppose…at least as long has Wells was with him. In the 1920s, it was not unusual for Oklahoma governors to grant convicts a leave of absence from prison…even some convicted of major crimes. Spencer was given leave on July 26, 1921, to attend to “some family business” supposedly. He returned to McAlester a month later and became a trustee and was trained to be an electrician. Early in 1922, he was assigned to do electrical work outside the prison in someone’s home. He completed the work, but then he packed up his tools and didn’t return to the prison.

Within a month, Spencer had hooked up with Silas Meigs, who had escaped in a similar fashion from the prison. The pair robbed the American National Bank at Pawhuska, making a “major” haul of $147. Soon the two men robbed a bank at Broken Bow, and this one netted a little more profit. They escaped with between $7,000 and $8,500. They forced a motorist to take them three miles north of town where they had left two horses. The robbers rode away. A few days later Meigs was killed in a gun battle with lawmen northwest of Bartlesville, where he had gone to visit his brother. Spencer remained hidden in the Osage Hills, a vast stretch of country with timber, rocky canyons and thickets of almost impenetrable scrub oak. Friends and relatives brought him food. Spencer later joined up with Henry Wells and two other criminals and robbed a bank at Pineville in 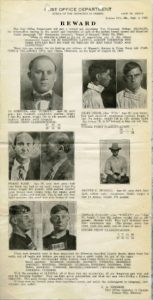 southwest Missouri. Spencer soon hopped a freight train bound for Oklahoma. Spencer found three other men to help him burglarize a store in Ochelata south of Bartlesville. They were surprised by the town’s night marshal who was shot and killed before the outlaws fled in a car. On June 16, Spencer and another man robbed the Elgin State Bank in Chautauqua County, Kansas. They fled with about $2,000 in cash and $20,000 in bonds.

Exactly how many banks were robbed by Ethan Allen “Al” Spencer during the eighteen months following his escape is not known. Evidence suggests he probably robbed at least 20 banks in Oklahoma, Kansas, Missouri and Arkansas. The end of his crime spree came on a Saturday evening, September 15, 1923, when he was shot and killed. There is, however, debate on just how he was killed. U.S. Marshal Alva McDonald, a veteran lawman and personal friend of Teddy Roosevelt, claimed he and other lawmen shot Spencer just south of Caney, Kansas. Another account reported that Spencer was killed about five miles north of Coffeyville, Kansas. The third account came from outlaw Henry Wells’ autobiography. Wells claims that Stanley Snyder, a friend of Spencer’s, killed the outlaw with a shotgun while Spencer was eating supper. Some friend he must have been, but then I guess there is no honor among thieves. Al Spencer’s outlaw days were over, nevertheless, and a new breed of bad men soon took his place using only automobiles. Spencer was the last major Oklahoma outlaw to use horses in his crimes.

2 Responses to Not A Very Good Criminal