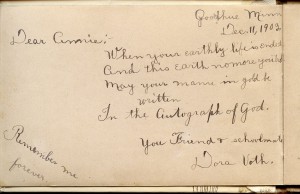 Autographing a yearbook, or in the past, an autograph book is a tradition that really never goes away. The school year…or a certain period in a person’s life is coming to an end. Friends want to be remembered and people want to remember their friends, so they write something in their yearbook that they hope will sound profound, sophisticated, grown up, or at the very least, not sound too stupid. It doesn’t matter that you know the annual yearbook signing is coming, when the moment arrives, you find yourself on the spot again. Do you write a poem? Do you say something goofy? Or, do you say something with deep feeling, knowing that you may not see these people much anymore…if at all? Of course, it depends on who you are speaking too. Goofy works for the class clown, and profound might be great for the valedictorian, and if these are your good friends, you might write something with a little more feeling, but if the classmates are little more than acquaintances, what do you want to say to them? I suppose that is more when the poem or saying of the day comes into play. I mean, you are on the spot, and you can’t take all day.

Still, there are times when the poem of the day says exactly what you are feeling, like the friends of my grandmother’s and my dad’s who had hoped that they would not be forgotten as the years passed. In reality, I think most of us remember most of our classmates, whether it’s is just their face, or even their name, but that doesn’t mean that we spend a lot of time with them over the years, unless they were really a good friend. Nevertheless, there were very few classmates who completely faded into obscurity to the point that we don’t even remember that they were classmates at all, and sometimes classmates come back into our lives to a degree, as is the case with people we reconnect with on Facebook or in some other online form of social media. That still doesn’t mean that the friendship has been completely rekindled, but rather that curiosity came into play a little bit, for a little while.

The main reason for autographs, I think, is to make a way to remember a time in our lives that we really can’t visit again. Even with class reunions and such, you really don’t go back to that time exactly. You and your classmates might talk a little bit about what you did in school, and a lot about what everyone is doing now, but 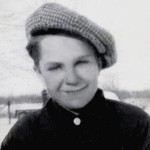 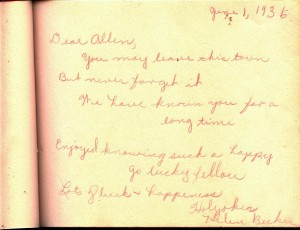 at some point, there just isn’t that much to talk about anymore. Your lives have taken different directions, and you have very little in common. That’s probably why class reunions last for just a weekend, because if they were longer, no one would go. There just isn’t a weeks worth of conversations, unless you continued on as friends after your school days were over, And then you wouldn’t need a class reunion to get you together so you could catch up at all. I guess that’s why I think class reunions put you on the spot all over again.