Workin’ On The Railroad

In mid 1951, my father-in-law was hired to work on the railroad in Dalin, Montana. It was a necessary job change for him, since the prior job he had been working couldn’t seem to pay it’s employees, and you just can’t raise a family with no money, nor can you continue to work for someone on the hope that they will finally pay you. I’m quite certain that this job felt like they were rich, after the struggles of the previous situation.

At the time of the move to Dalin, they had only their daughter, Marlyce. During their 5 years in Dalin, the family would grow by two more children. Debbie was born in 1953, and my future husband, Bob was born in 1954. Both Debbie and Bob were born in Miles City, Montana, although Bob was almost born on the road between Billings, where the family had gone to spend the day, and Miles City. Thankfully they made it in time, and Bob was born in the hospital in Miles City.

During the years they lived there, the family lived in a house that was owned by the railroad. There were actually two houses on the property. A big house where the boss lived, and a smaller house where my future in-laws lived. But the interesting thing about the property was that there were also two railroad cabooses that had been turned into homes for some of the other railroad employees.

Now, I don’t know about you, but to me, that would be an interesting idea. I’m sure someone decided that it would be an inexpensive way to house the employees who didn’t have big families, and it did serve it purpose, as you can see in the picture. The kids must have thought it was interesting, because they liked to play around there, although maybe they never gave it much thought. When I look at it from the future, it seems like a very 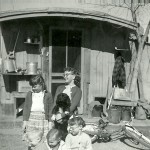 different kind of life than any I would have imagined, but I suppose that many things we take for granted today would seem quite strange to the people of the past.

Trains have always held an interest for me, and I especially liked the caboose, so I’m quite sure I would have wanted to see what they were like inside, and maybe the kids did get a chance to see for themselves, I don’t know for sure. I also think I might have found it somewhat interesting to live in a caboose, at least in the short term. It would undoubtedly get to be pretty cramped after a while, but for the single person workin’ on the railroad, it might have been just the ticket.

2 Responses to Workin’ On The Railroad