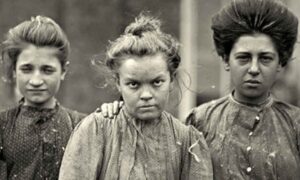 In the toughest of times, the women of the west had to participate in the work force since families had to make ends meet any way they could. But the work was demanding, often outdoors and with physical labor and lots of hours doing agricultural and other large-scale jobs. By the end of the day, they were exhausted…just like their men. It’s not that women aren’t capable of hard work, because they absolutely are. Nevertheless, their bodies aren’t built for the same kind of work as the men…or at least it isn’t as easy as for the men.

During World War I and World War II, when so many men were called to duty, and so many were killed, the workforce at home was dramatically shrinking. So, like they always did, the women stepped up. It’s not that the men weren’t stepping up too, 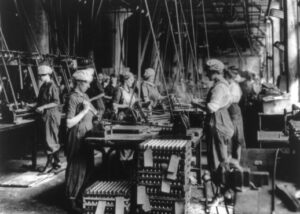 because going to war is most certainly stepping up. Really, everyone was doing a job that was not in their normal wheelhouse. Times were tough and tough times called for tough people. It the war was going to be won, the military had to be supplied with the necessary materials to fight with. Things like ammunition, uniforms, boots, tanks, planes, bombs, guns, and much more were vital; and without the help of the women back home, the men would not have the things they needed to win the war.

The thing about these particular women was that at that time in history, most women were stay-at-home moms, and at that time that really meant cleaning the house, cooking, and caring for the children. These were not times of going to the gym to work out, and the main exercise was the daily chores. Don’t get me wrong, because the chores 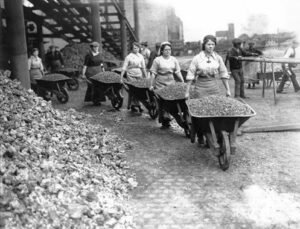 were hard work, and that did keep the women in shape, but they weren’t miners or factory workers. This necessary work was all new to them. The endeavor to bring these women into the workforce was no small undertaking. The had to be trained and trained quickly. There was no time to waste. The women, for their part, jumped at the chance to help their men and the men of the nation. They learned their new jobs quickly and did their jobs efficiently. They were loyal to their men and their country, and they were willing to take on the exhausting jobs they were asked to take on. In fact, I don’t think the wars could have been won, without both parts…the men and the women, and the necessary work they did.