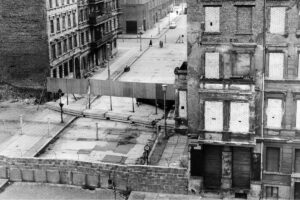 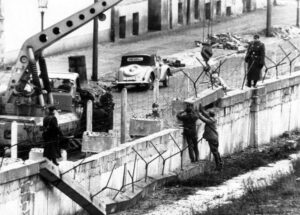 In August of 1961, virtually overnight, the Berlin appeared, separating East and West Berliners from each other. Streets, subway lines, bus lines, tramlines, canals, and rivers were divided. Family members, friends, lovers, schoolmates, work colleagues, and others were abruptly separated. For many, life was put on hold. That meant that families were instantly separated from each other, and there was nothing anyone could do about it. If a child was spending the night with a grandparent, they now had to stay there. If couples were separated, possibly due to jobs or something, they couldn’t get back together. Families who lived on opposite sides of town, couldn’t see each other. No recourse. All the families could do was stand beside the wall and talk to each other.

From the time of its construction, it was more than two years after before anyone was able to cross from one side of the wall to the other. In the meantime, children grew, children were born, people died. Some children and grandchildren never got to see their parents or grandparents again. The whole purpose of the Berlin Wall was to force the people in East Berlin to accept communism. The only way they “might be able” to stay alive was to comply. So, the citizens of East Berlin became virtual prisoners overnight. Their sentence was long, and they had no trial. They were simply locked up in their own city.

The “sentence” continued for more than two years, before anything changed. Then, finally, on December 20, 1963, nearly 4,000 West Berliners were allowed to cross into East Berlin to visit relatives. It was called a “one-day pass” and didn’t mean the end of the siege. Nevertheless, it was a moment of hope. The day was a result 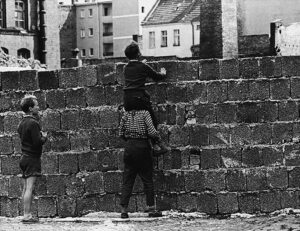 of an agreement reached between East and West Berlin. Eventually, over 170,000 passes were issued to West Berlin citizens, each pass allowing a one-day visit to communist East Berlin. Of course, there would be no passes for East German citizens to visit the west. The government knew they would not come back.

The day was marketed as a “wonderful government” doing some kind of a great thing. There were also moments of poignancy and propaganda. The reunions who were filled with tears, laughter, and other outpourings of emotions as mothers and fathers, sons and daughters finally met again. They were grateful, if only for a short time. The tensions of the Cold War were ever close by.

As people crossed through the checkpoints, loudspeakers in East Berlin greeted them. They were told that they were now in “the capital of the German Democratic Republic,” a political division that most West Germans refused to accept. The propaganda continued as each visitor was given a brochure that explained that the wall was built to “protect our borders against the hostile attacks of the imperialists.” They were told that decadent western culture, including “Western movies” and “gangster stories,” were flooding into East Germany before the wall sealed off such dangerous trends. The picture they were painting was of the East German government being the “saviors of the morality” of the people.

The West Berliners weren’t terribly happy either and many newspapers charged that the visitors charging that they were just pawns of East German government propaganda. It was said that the whole thing was a ploy to 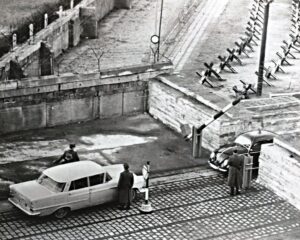 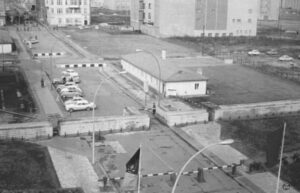 gain West German acceptance of a permanent division of Germany. Whatever the case may be, the visitors felt that they had no choice to comply with the rules, because their hearts were being torn out by these separations. The separation continued until President Reagan called for the wall to be torn down in a speech in West Berlin on June 12, 1987…almost 26 years after it was built.