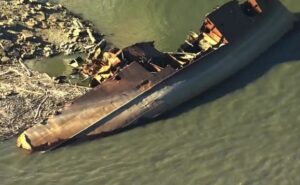 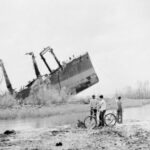 Some years are filled with rainy and snowy days, while others are drought filled, like this one. Each can have their consequences, if things go too far. As drought in the United States has progressed this past year, lakes and rivers have dried up, including the widest river…the great Mississippi River, which is not nearly as wide or as deep as it used to be. The reality is that suddenly, the Mississippi is bone-dry in some places. The average depth of the Mississippi River is normally 9 to 12 feet, with the deepest point being 200 feet. As with any river that is deep enough to run big boats or even little ones, invariably, there comes a sinking or two.

Sometimes, boats that sink can be recovered, and sometimes they can’t. The ship might be at a depth that makes it impossible, or the right equipment might not be available. Whatever the reason, in just about any body of water, there are bound to be a few mysterious finds hiding beneath the surface. As the Mississippi River has gone through the drought this year, there are the expected myriad of boats that are now stranded and languishing on dry land, but there are also a few surprises that are starting to appear. Some of the ships are old, but some are not as old, like the Diamond Lady, a casino boat that used to grace the mighty river. The Diamond Lady was christened in 1991, and was used in Iowa for a time, but in 2019, as things in Iowa got tough, the beautiful casino boat sailed south to an unknown fate in the mighty Mississippi River. The boat had been stored in Lake McKellar, but sank in 2021 during a freeze. Now it has resurfaced again. It’s not the oldest relic in the Mississippi River and the surrounding waterways, but it might have been the most majestic.

Unfortunately, there are sad finds in the river too. The drought has unearthed a sunken 19th-century shipwreck and human remains in the Mississippi River. I’m sure these won’t be the only human remains that suddenly surface, because while drowning victims are often found, there comes with a gambling a certain element that 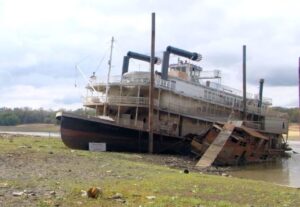 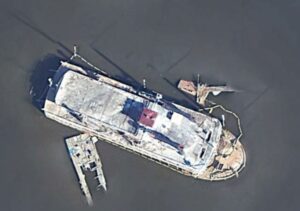 often brings the mysterious deaths, whether they are murders or just mysterious deaths whose cause cannot be determined. I’m sure there will be more ship, and possibly more bodies that turn up too. Then, before too long, the waters will return, and the mysteries will once again be hidden beneath the surface of the rivers and lakes.