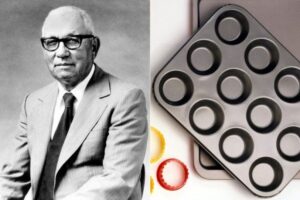 When Roy Plunkett went to work that day, his plan was to make a better refrigerator. Plunkett was a chemist who worked for a company named DuPont. It was a dream job for a 27-year-old man, just starting his working career. A plan had been forming in his brain as to how the refrigerator could be improved. The chemicals necessary were a gas named Tetrafluoroethylene and Hydrochloric Acid. He has gathered the chemicals together, but he wasn’t quite ready to start experimenting yet, so he cooled and pressurized the Tetrafluoroethylene gas in canisters overnight, planning to get started bright and early the next morning.

When Plunkett returned the next day, he found that there was no gas in the canisters. Oddly, the canisters weighed the same amount as when they were full, but nothing came out of them. Well, this was confusing!! Where did all the gas go? Now, Plunkett was intrigued, so he cut the canisters in half. During the cooling process, the gas had solidified on the sides of the canisters, creating a slick surface. I can only imagine what their thoughts were on that. They had to figure out what had happened. The use of the chemical was one thing, but curiosity about what had happened was more than Plunkett to stand to just let go.

According to the account in DuPont’s history annals, “Rather than discard the apparent mistake, Plunkett and his assistant tested the new polymer and found that it had some very unusual properties: it was extremely slippery as well as inert to virtually all chemicals, including highly corrosive acids. The product, trademarked as Teflon in 1945, was first used by the military in artillery shell fuses and in the production of nuclear material for the Manhattan Project.” Of course, these days, we all know about Teflon. The main use is in non-stick cookware. It has other uses, but that is the one we all would know, because Teflon became a household word. Any cook, chef, homemaker, or even bachelor, knows about Teflon cookware. It’s big part of cooking life. 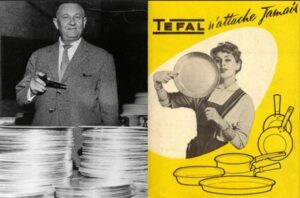 While cookware is the main thing that Teflon is used for, Plunkett wasn’t thinking of cookware when he invented it. In fact, it wasn’t until a decade after Plunkett sawed those canisters in half, that a French engineer named Marc Grégoire saw the cookware value and introduced “Tefal” pans…the first to be lined in Teflon. The funny thing is that the idea actually came from his wife. I suppose that the person who normally did the cooking in those days, would be the one to see the value in a non-stick finish. Before Tefal, Grégoire used Teflon on his fishing tackle to prevent tangling. The guys thought of fairly good uses, but Grégoire’s wife realized that the nonstick surface would be perfect for cookware.