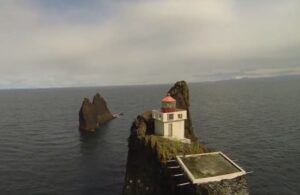 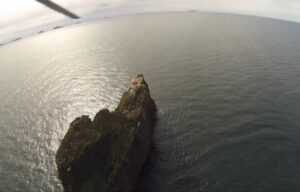 In the years before GPS (Global Positioning System), lighthouses were a vital part of keeping ships off of the shore, rocks just below the surface, and islands. While necessary, lighthouses were not always easy to build. Of course, a lighthouse that sat on the shoreline of a coast was a fairly simple build, but one that sat on the top of a dangerous rock outcropping was more difficult, especially if the rocks were very tall and hard to access, like the Pridrangaviti Lighthouse in the Westman Islands of Iceland.

The Pridrangaviti Lighthouse was built in 1938, right before the onset of World War II. Its construction was by 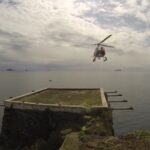 no means an easy task. Construction workers had to scale the cliff to reach the place where they were to lay the lighthouse groundwork. This mean facing slick rocks, rain, winds, and even heavy surf. One misstep would lead to their death on the rocks and icy North Atlantic Ocean below. Nevertheless, the task was eventually finished, and the effect is quite beautiful.

The lighthouse warns passing ships of a cluster of slender rock pillars that jut out from the ocean’s surface. The pillars look like fingers stretching toward the sky, and they are located miles away from civilization. The lighthouse looks like a colorful speck on top of the largest pillar. The tiny, red-roofed lighthouse is quite likely one of the loneliest lighthouses in the world, and I don’t think I would want to be the person who had the job of manning it. The lighthouse is the only thing on the rock, and so you would likely be there for at least a month at a time before it would be feasible to leave.

Repairs were a big issue as well…at least until modern times. These days, when repairs are needed, supplies 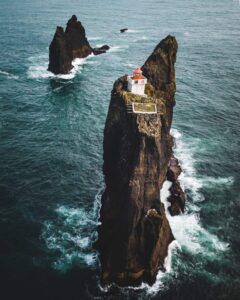 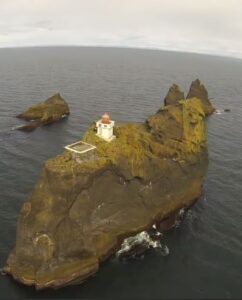 and workers can be helicoptered in. And these days, the rock sports a helicopter pad for any visitors who might go there. You could also get there by boat and go rock climbing to reach the top, but anyone who goes must know that visiting the Pridrangaviti lighthouse is a dangerous endeavor. One wrong step, and any unsuspecting explorers just may find themselves going for an unplanned swim with the killer whales that like to hang out in the waves below. Nevertheless, just imagine being able to go and visit such a lighthouse. I’m not a rock climber, so I don’t know about climbing up, but to helicopter in and be able to explore the lighthouse and the grounds…yep, that would be very cool.

One Response to Pridrangaviti Lighthouse