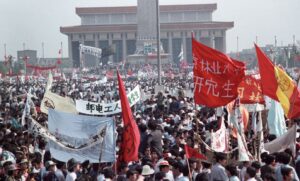 Some heroes are forever unknown, and the hero of Tiananmen Square remains unknown to this day. I’m not sure how they can manage never to tell anyone about their heroic act, but then in 1989 Bejing, China, being able to keep your mouth shut was tantamount to staying alive.

The summer of 1989 found Tiananmen Square in Bejing overtaken with pro-democracy protestors…a situation that the communist government was not happy about. Students, workers, soldiers, and teachers had joined together in peaceful protest, seeking democracy, freedom of the press, and freedom of speech. As the protests progressed, they were joined by more, and more…and still more people. At the height of the protest, an estimated one million people were milling around in the square, and their efforts were becoming known worldwide. In fact, the world was becoming inspired by the efforts of the protestors.

The Chinese government, however, was becoming highly agitated by what was going on, because they felt like they were losing control. So, on June 4, the Chinese government cracked down on those protests in the most horrific way. They sent in armed military and tanks. The inevitable result was that the government killed hundreds, and even thousands of protestors, even shooting them in the back as they were running away. 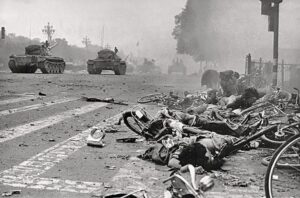 The killing continued into the next day, and just after noon on June 5 a line of eighteen tanks began rolling down Avenue of Eternal Peace. The tanks, representative of a corrupt government power, came lumbering down the street…impenetrable, unstoppable, and fully able to squash a person like a bug. The show of force continued its parade down the Avenue, toward Tiananmen Square…until one lone man stood in their way. The unknown man, dressed in a simple white shirt and black pants, holding two shopping bags, strode into the Avenue and stood directly in front of the lead tank. Amazingly, it stopped. Then the tank moved right, but the unknown man countered. Then it moved left, and he countered again. The standoff drew national attention, and the unknown man became known as “Tank Man.” The interaction lasted just a few minutes, it proved that one “everyday person” can accomplish a lot, by standing up to tyranny. One report suggested that he was the son of factory workers…a blue-collar guy growing up in a blue-collar family in a blue-collar neighborhood. And because of censorship restrictions in China, he may not even know about the images of him, or that Time Magazine named him one of the century’s “top revolutionaries.” The reality is that he wasn’t a revolutionary…at least not in the sense that he went out and fought with the resistance. He was just a guy who saw something that was horribly wrong and decided that it was enough!! His stand said simply, “No More!!”

This everyday citizen managed, single-handedly to stop the killing that day, and he intended to do it even if it 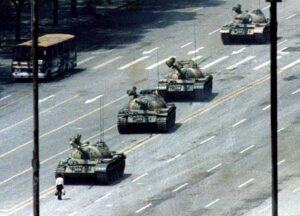 cost him his life. That is inspiring, because it tells us that if we see something wrong and decide to take action, we too can change the world. If we sit idly by and do nothing to stop tyranny, then we are no better than those who are bringing tyranny.

We are seeing movements just like this one man since the 2020 election. People who have never run for office before, suddenly are. People are showing up at school board meetings, city council meeting, and other such governmental meetings. People are taking a stand and proving that we are a voice to be reconned with, and we will not be bullied anymore.