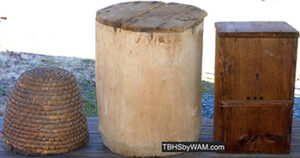 People have been eating honey since ancient times. The early connoisseurs of honey weren’t beekeepers, but rather foragers. It stands to reason that at some point people were going to want to have their own supply of honey, and with that beekeeping was born. So, how were they going to have a continuing supply of the honey they loved? Enter the apiary. I didn’t know the meaning of an apiary until my 1st cousin once removed, Larry Cameron got into beekeeping. I had never known anyone who was a beekeeper before, but in my opinion, you would have to be brave to do that job…brave or have the right equipment, I guess. 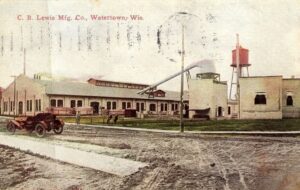 In 1863, a man named G.B. Lewis founded G.B. Lewis Company with the idea of supplying these beekeepers with the necessary beeware to run their businesses. Beeware was a term I really hadn’t heard before, but when I looked it up, it made sense. Beeware, of course, refers to the equipment used by beekeepers. Hives, in 1863, came in three forms…a skep, a log hive, and a box hive. The skep, which was a tightly woven basket, was used the oldest style, but it became obsolete in America, probably because there was plenty of wood to use. G.B. Lewis Company was known for many years as the world’s largest manufacturer of beeware. 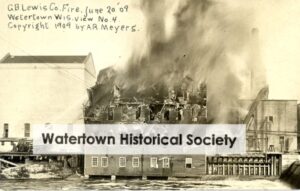 Because the fire was so destructive, it appeared that a large portion of the west side if the city would be destroyed. At G.B. Lewis Company, the entire box, beehive, and section factory was destroyed, along with the Watertown Woolen Mills, owned by Mrs James Chapman. The damage to the G.B. Lewis Company was about $15,000, but it was only insured for $4,500, and at that time there was no guaranteed replacement. Next door to the G.B. Lewis Company and the Watertown Woolen Mills, were two large lumberyards, the Empire flour mills, and several frame buildings. These were apparently saved in the end due to the hard work of the fire department. The origin of the fire is remains unknown to this day.