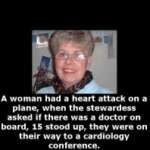 In 2003, a sixty-seven-year-old woman named Dorothy Fletcher had a heart attack on a flight to Orlando, Florida. A heart attack in any situation is bad news, but on a flight with limited medical supplies and even fewer medical staff. Immediately following Fletcher’s heart attack, the attendant, as often happens, asked if there was a doctor on board. In a medical emergency, like a heart attack, any doctor is better than no doctor, but what she got was so much more than what she expected. In response to her anxious inquiry for a doctor, 15 cardiologists stood up. Not just doctors…cardiologists, and not just one, 15!! How could this happen? Well, as it turns out, Fletcher has her heart attack on the perfect flight. The 15 cardiologists were on their way to a cardiac conference. Totally a God thing!! Needless to say, she survived.

Heart attacks are scary no matter where you are, and when an emergency happens, things move very fast. On 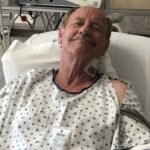 Sunday afternoon, October 14, 2018, in the Walmart parking lot on the east side of Casper, Wyoming at 4:45pm, I faced my own emergency when my husband Bob Schulenberg had a heart attack in the Walmart parking lot. Before I even knew that my husband was down behind the car, a man who watched him fall was with him. By the time I got to him a cardiac care nurse was treating him. Almost instantly, a transport worker from the hospital who also knew CPR assisted, and then another cardiac care nurse showed up. The first man on scene had called for an ambulance, and with that came the firemen, most of whom my husband, as their mechanic for a number of yeas knew. Within two hours, my husband was recovering from the Widowmaker heart attack. People can say what they want, but without God’s orchestration, my husband would not have had all those people there and every procedure in lace to save his life. Everyone was in a place they normally weren’t, and none of them knew why. Even the heart cath team was at the hospital when they normally wouldn’t have been at that time.

My own emergency, fell into place in much the same way. When I was on a hike in the mountains, I slipped and fell…breaking my shoulder. We were ¾ mile from the end of the trail and the car. So, what is the miracle here? Well, there is one. When I fell on that trail, I was with a group of people. My husband and I have hiked many trails…just the two of us. We have never had a “situation” on the trail. On this day, I was with, not only my husband, but my sister-in-law and her partner, a nurse and life flight pilot, respectively. In addition, I was with 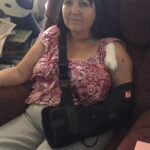 my other sister-in-law, who is an experienced caregiver, as are my husband and me. The other people with us were physical therapists. When I said that I had broken my arm (shoulder), I immediately had a medical team at my side. They quickly fashioned a sling out of a bandana and a dog leash (amazing), but when they got me stabilized, and were ready to try to get me up, two hikers came over the hilltop saying that they were CNAs and they could help get me up. Unbelievable!! Then, they gave us a sweatshirt to usa as a gait belt for stability. All those people there for me when I needed them most!! That is totally a God thing. Yes, all these people were in the right place and the right time, but you will never convince me that it was a complete accident that they were. Nope!! That was a God thing!!