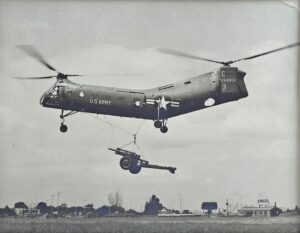 Before the helicopter was invented, getting wounded men out of the battlefield was much harder. Transporting the wounded is dangerous work, whether you are driving, walking, or flying them out, but the helicopter could get in and out so much faster than any other mode of transportation, and once they were up, they were often out of range of the guns below. That made their escape much more likely to happen. In December 1961, the USS Core (T-AKV-41) docked in Saigon with 82 US Army Piasecki H-21 helicopters. Operation Chopper commenced a little more than 12 days later.

On January 12, 1962, the first helicopter assault, called Operation Chopper, took place when 33 United States Army CH-21C Shawnee transport helicopters of the 8th and 57th Transportation Companies airlifted 1,036 soldiers of the Army of the Republic of Vietnam (ARVN) into battle against an insurgent Viet Cong (National Liberation Front) stronghold, approximately 10 miles west of Saigon. The landing zone was 150 yards by 300 yards and surrounded by tall trees. While there were trees surrounding the field, the area was still not very safe. Nevertheless, the VC were surprised and soundly defeated, but they gained valuable combat experience they later used with great effect against American troops.

The paratroopers also captured an underground radio transmitter. This operation heralded a new era of air mobility for the US Army, which had been slowly growing as a concept since the Army formed twelve helicopter battalions in 1952 as a result of the Korean War. These new battalions eventually formed a sort of modern-day cavalry for the Army.

The Piasecki Helicopter Company CH-21C Shawnee was a single-engine, tandem rotor transport helicopter. The flight crew consisted of three men, with the addition of one or two gunners. It could transport up to 20 soldiers 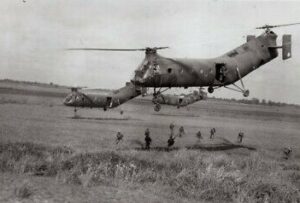 under ideal conditions. The helicopter’s overall length was 86 feet, 4 inches, with its rotors running. It was 15 feet, 9 inches high. The rotors were 44 feet in diameter and the fuselage was 52 feet, 7 inches long. The empty weight was 8,950 pounds and maximum takeoff weight was 15,200 pounds.

The Piasecki Helicopter was not without its issues, however. Its performance in the hot and humid climate of Southeast Asia was limited, restricting the troop load to 9 soldiers, out of the 20-person capacity the helicopter was said to have. It was withdrawn from service in 1964 when the Bell HU-1A Iroquois began to replace it. All CH-21Cs were retired when the CH-47 Chinook assumed its role in 1965.

One Response to Operation Chopper