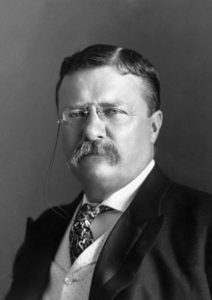 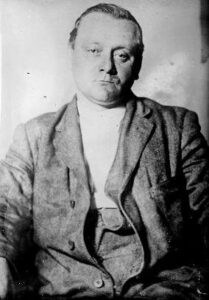 I have always known that I was stubborn, and “bull headed” and if you ask my sisters, they will very much agree with me on that fact, but I seriously doubt if they would ever call me stubborn if I were compared to President Theodore Roosevelt. I don’t think many people are as stubborn as Roosevelt was. Roosevelt didn’t run for his initial term in office, but rather became president of the United States because William McKinley was assassinated while Roosevelt was serving as vice president. He did run for and win a second term in the election of 1904, during which he promised not to run for a third term thereafter. A man of his word to a point, Roosevelt stuck to that promise through the 1908 election, but then he decided to run for President again in 1912, first losing the Republican primary to the incumbent William Taft and then running at the head of a brand-new party, the Progressive “Bull Moose” Party. It is a strange name for a political party, but I think it might have been appropriate for Roosevelt.

When Roosevelt decided to run for president again in 1912, a saloon owner named John Schrank became obsessed with him, and after having a nightmare that convinced Schrank that Roosevelt was responsible for McKinley’s assassination. That fueled his obsession, and on October 14, 1912, he walked up to Roosevelt as he exited a Milwaukee hotel on route to a campaign event and fired a .38-caliber revolver right into his chest. For most people, this would be the end of the story, but this is where Roosevelt really earned the name attached to the political party of which he was a member.

Unfortunately, Schrank was not a bad shot, and the bullet hit its mark. Fortunately, the path of the bullet was not an easy one. After passing through Roosevelt’s glasses case and 50 pages worth of notes in his breast pocket, which slowed it down considerably the bullet hit Roosevelt’s chest. The items in its way likely slowed the bullet enough to save Roosevelt’s life. Then, in typical “bull headed” fashion, the former president coughed into his hands to check for blood, and upon finding none, continued on to the Milwaukee Auditorium, where he delivered an 84-minute speech that began with the following lines, “Friends, I shall ask you to be as quiet as possible. I don’t know whether you fully understand that I have just been shot; but it takes more than that to kill a Bull Moose. But fortunately, I had my manuscript, so you see I was going to make a long speech, and there is a bullet – there is where the bullet went through – and it probably saved me from it going into my heart. The bullet is in me now, so that I cannot make a very long speech, but I will try my best.”

The bullet stayed lodged in his ribs throughout the rest of his unsuccessful campaign, and until his passing in 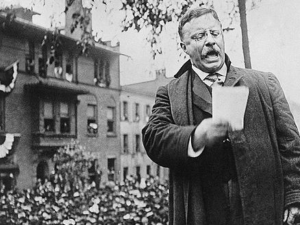 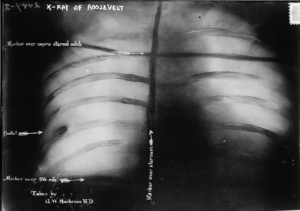 1919. While Roosevelt lost his race, his determination did show the kind of fortitude it takes to be president of this country. Being the leader of the free world, is not something that can be handled easily. The President of the United States must be an anointed position, and it is not one that just anyone can handle. In many ways, the best presidents are a type of “bull moose.” They have to be to take the pounding they have to take, and then keep coming back for more.