The Memorial to Heroic Self-Sacrifice 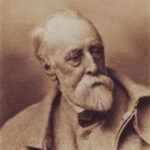 When someone sacrifices their life to save the life of another, its big news for a while, but eventually only the one who was saved, and maybe their family, remember the name of that selfless hero. In 1887, sculptor, George Frederic Watts, who thought that loss of memory concerning these heroes was horribly sad and just plain wrong, proposed a memorial to honor these forgotten heroes.

The Memorial to Heroic Self-Sacrifice is a public monument in Postman’s Park in the City of London. Watts wanted the memorial to be ready in time to commemorate the Golden Jubilee of Queen Victoria. Unfortunately, the project was not accepted at that time, but in 1898 Watts was approached by Henry Gamble, vicar of Saint Botolph’s Aldersgate church. Postman’s Park was built on the church’s former churchyard, and the church was trying to raise funds to secure its future. That was when Gamble heard about the memorial project inspired by Watts. Gamble felt that Watts’ proposed memorial would raise the profile of the park…make it more memorable. Because it was going to be an ever-evolving memorial, it was unveiled in an unfinished state in 1900. The memorial consisted of a 50-foot wooden loggia designed by Ernest George. A loggia is an 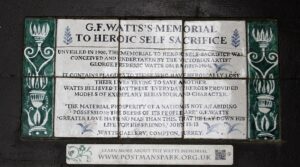 architectural feature which is a covered exterior gallery or corridor usually on an upper level, or sometimes ground level. The loggia sheltered a wall with space for 120 ceramic memorial tiles to be designed and made by William De Morgan. At the unveiling, only four of the memorial tiles were in place.

Watts died in 1904, before his idea was really in it’s full glory. His widow, Mary Watts took over the running of the project. In 1906, after making 24 memorial tablets for the project, William De Morgan abandoned the ceramics business to become a novelist. It was a bit of a blow to the project. The only ceramics firm able to manufacture appropriate further tiles was Royal Doulton. Mary was dissatisfied with Royal Doulton’s designs, and preoccupied with the management of the Watts Gallery and Watts Mortuary Chapel in Compton, Surrey. Eventually, Mary Watts lost interest in the project. Work to complete it was sporadic and ceased altogether in 1931 with only 53 of the planned 120 tiles in place. I think it is very sad that such an amazing project was sidelined…for lack of interest!! Seriously, lack of interest!! Finally, in 2009, the Diocese of London consented to

further additions to the memorial, and the first new tablet in 78 years was added. In my opinion, it’s about time.

As interest grew again, a mobile app was created in 2013. It was called The Everyday Heroes of Postman’s Park. Once again, interest wained…at least for the app, so it is now discontinued. The app provided a detailed account of the fifty-four incidents commemorated on the Memorial when a visitor scanned its plaque with a handheld device. Again, I find myself feeling sad that people can possible lose interest in the everyday heroes in our world. They are each amazing, and they should never be forgotten.