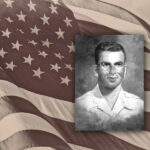 It’s hard to picture a dentist as being a hero, but US Army Medic Ben Salomon, who was a dentist before he was drafted in to the US Army as a private in 1940, as World War II was in its early stages. Salomon was assigned, not to the medical units, but rather, to the infantry. It was in the infantry during rifle and pistol qualifications that Salomon was rated an Expert Marksman. He also had medical knowledge that could be used during battlefield surgery. Salomon was assigned to a unit as their medic. Being a medic in wartime means that you are doing the noble thing, a task which is not often recognized as anything special. I think was have all seen the television show, MASH, in which the position of Army Doctor is viewed as mostly safe, far from the front lines, and given to a little bit of hanky panky. It doesn’t often paint a picture of heroic actions, although, sometimes the doctors are heroic (Nevertheless, I don’t mean to say that all military doctors are like the doctors on MASH, who are, after all, playing a part.) Medics serve and protect like every other serviceman, but they sometimes see a lot more of war’s ugly side. These unit medics might saw torn apart friends, horrific injuries, and a lot of deaths. The men they served with every day were their friends, and while the medic was usually behind the unit in a tent, caring for the wounded, these were not strangers to them. They were friends and comrades in arms.

Just one month after Salomon’s promotion to captain, he experienced his first battle. Salomon volunteered to replace the 2nd Battalion, 105th Infantry Regiment’s field surgeon, who had been wounded. The unit was sent to Saipan to fight the Japanese forces. Little did Salomon know that this would be his only battle. When the unit landed in Saipan, they found immediately themselves in one of the most intense fights in the Pacific arena. Apparently this little island had been determined to be vital…no matter which side you were on. The Japanese army was not willing to concede the island and the US Army was adamant that they needed to take it. By the time Salomon’s unit arrived, the Japanese had taken the approach of advance and attack to their own deaths.

The tents for the field surgeons were located 50 yards behind the front, and it was there that Salomon worked to triage the severely wounded men. On July 6, 1944, the Japanese reached the trenches and Salomon’s position. Then on July 7th, the Japanese made it over the trenches and went straight to the medical tents. Inside, Salomon was treating wounded soldiers. He looked up and saw a Japanese soldier storm into the tent and bayonet one of the wounded and unarmed soldiers. Solomon acted instinctively. He grabbed an M1 rifle which was on a table close by and fired, killing the enemy soldier. For a medic, who never expected to need to fire his weapon, that situation must have come as a bit of a shock, but that soldier was not to be the only one Salomon killed that day. He turned back to the wounded soldiers, and then he saw two more enemy soldiers burst into the tent. There wasn’t much room in the tents, and they weren’t designed for hand to hand combat, but the tent soon became the battlefield, nevertheless. Salomon began swinging the rifle and clubbed the first soldier, then jamming the second with the butt of the weapon. Then, he shot one and bayoneted the other.

Immediately, four more Japanese soldiers made their way into the medical tent and tried to catch Salomon by surprise. One of the soldiers had a knife that Salomon kicked out of his hand before firing his rifle, killing one soldier and using his bayonet to kill another. By now, Salomon was out of bullets, so he picked up the knife and engaged with the two remaining enemy fighters. He killed one using the knife before head-butting the other, who was then shot by one of the patients in the tent. After dispatching the enemy soldiers, Salomon ordered his colleagues to evacuate the wounded. He would stay behind to hold off the enemy to give them the extra time they needed. As Captain Salomon loaded his rifle, the 30 wounded soldiers and orderlies in the tent started to retreat. The decision to stay and fight while the wounded were evacuated saved many lives, but Salomon was now in a battle that he had no hope of winning, much less living through. Ben Salomon made his last stand. He commandeered a heavy machine gun and was last seen firing at oncoming Japanese troops.

When the American troops were finally able to return to the area, they found Salomon’s body slumped over the machine gun, surrounded by the bodies of 98 Japanese soldiers. He had been shot 76 times and had 24 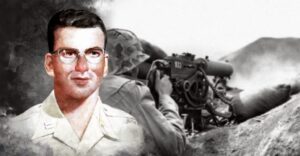 bayonet wounds on his body. Yes, Captain Salomon had died in the battle, but not before he killed 98 enemy soldiers, and the wounded soldiers and the medics with him had all managed to escape. Salomon was a serious force to be reckoned with, as the Japanese found out that day.

Medical personnel were considered ineligible for the Medal of Honor at that time, due to the terms of the Geneva Convention, so the request that he be awarded the medal was denied. After numerous other attempts over the years, Salomon’s bravery was finally recognized with the Medal of Honor in 2002, 58 years after his death.