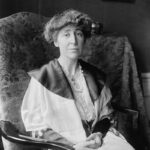 The 19th Amendment states that the right to vote “shall not be denied or abridged by the United States or by any State on account of sex.” In theory, this language guaranteed that all women in the United States could not be prevented from voting because of their gender. Of course, these days, no one really gives that a second thought, because…well, of course, women can vote. Who dared to think otherwise? Nevertheless, women were not always given the right to vote. In fact, for many years, men thought that politics was something that women could not possible begin to understand, and that it was a subject that was simply too harsh for the fragile female mind. Hahahaha!! We can laugh at such a thought now, because it is completely absurd, but that is what everyone thought back then…before the 19th Amendment was passed, following a fierce battle between the women suffragists and the men who ruled the nation.

Nevertheless, in the midst of that fierce battle for the right to vote, an odd event took place in the form of the election of a US Congress member, Jeanette Rankin somehow being elected to Congress!! She was elected to 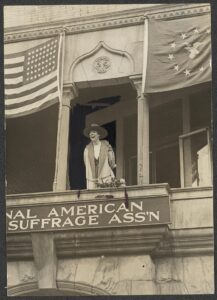 the US House of Representatives as a Republican from Montana in 1916, and again in 1940. Rankin was a woman, so how could this have possibly happened. She couldn’t even vote, and yet she won the election. That’s crazy. If her “fragile” mind could not be expected to understand how to vote for the office, how would she ever be able to function in the office. I mean, after all, she would be dealing with the same politics that her fellow members of congress had deemed her too fragile to understand. In fact, Jeanette Rankin would not be able to vote in an election until August 18, 1820. Her term in office ran from March 4, 1917 to March 3, 1919…during which time she was the only woman in the United States who could vote. Rankin would serve again from January 3, 1941 to January 3, 1943. Oddly, each of Rankin’s Congressional terms coincided with initiation of US military intervention in the two World Wars. A lifelong pacifist, she was one of 50 House members who opposed the declaration of war on Germany in 1917. In 1941, she was the only member of Congress to vote against the declaration of war on Japan following the attack on Pearl Harbor.

Jeanette Rankin was born on June 11, 1880, near Missoula in Montana Territory. Montana would not become a

state for another nine years. Her parents were, schoolteacher Olive (née Pickering) and Scottish-Canadian immigrant John Rankin, a wealthy mill owner. She was the eldest of seven children, including five sisters (one of whom died in childhood), and a brother, Wellington, who became Montana’s attorney general, and later a Montana Supreme Court justice. One of her sisters, Edna Rankin McKinnon, became the first Montana-born woman to pass the bar exam in Montana and was an early social activist for access to birth control. With all that, it’s little wonder that she became a congresswoman. Apparently, politics ran in the family, and was likely an often-debated subject in the family home.

While Rankin was in her first term in office, it would seem to me that she must have felt a very strong sense of responsibility, because she was at that time the voice of all women…at least as it applied to government and politics. I can’t say that I would have agreed with all of her votes in office, especially where it applied to the two world wars, which I feel the United States needed to be involved in. Perhaps it is that aspect of being in office that the men didn’t think women were very well equipped to handle…war being such an emotional issue and all. I still think that there are many women who might struggle with the idea of sending our men into war, but then there are men who feel the same way, so I guess it is just a matter of where people stand concerning war. To date, Rankin remains the only woman ever elected to Congress from Montana.