The Sound Of Krakatoa 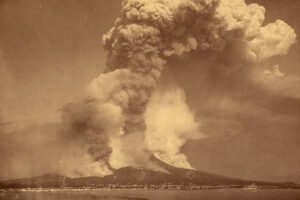 Volcanoes don’t just suddenly start erupting without warning. There is always some kind of warning. Things like earthquake swarms, a bulging mountain side, and little smoke and ash showings from the crater, always come first. These may not always all happen, but they do happen. The biggest problem in 1883 is that scientists didn’t really know that then. When Krakatoa, in the Sunda Strait of Indonesia, began to wake up on May 20, 1883, it had been dormant for around 200 years. The first sign was an ash cloud that was reported by the captain of a German warship. It rose nearly 7 miles above the island. Strangely, no one in Anjer, 25 miles from the island, or Merak, 35 miles away, reported anything unusual that day, but the inhabitants of Batvia, 80 miles away, “were startled by a dull booming noise, followed by a violent rattling of doors and windows. Whether this proceeded from the air or from below was a matter of doubt, for unlike most earthquake shocks the quivering was only vertical.” The event started rumblings and blasts from the volcano’s vents that continued for the next three months. But this was just the beginning. 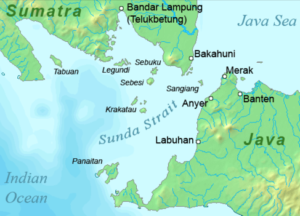 Krakatoa began to erupt in earnest on the afternoon of August 26, 1883, sending ash clouds at 22 miles above the island. Along with the eruption came a tsunami that rolled up both sides of the strait. The eruption continued into the night with increasing violence, and at midnight by volcanic lightning strikes to distances of ten to twelve miles. The event was similar to a horror movie, complete with electrical phenomena to a terrifying scale. The glow that surrounded the gigantic column of smoke and ashes was seen in Batava, eighty miles away. Some of the debris fell as fine ashes in Cheribon, five hundred miles east of the volcano.

While the August 26th event was terrifying, the most terrifying part of the disaster happened the next day. When Krakatoa erupted on August 27, the sound it made was accompanied by pressure waves that ruptured the eardrums of people 40 miles away, traveled around the world four times, and was clearly heard 3,000 miles away. That distance is comparable to the distance between New York and und from San Francisco. The 1883 eruption of Krakatoa was one of the deadliest and most destructive volcanic events in recorded history. Explosions were so violent that they were heard 1,930 miles away in Perth, Western Australia, and 3,000 miles 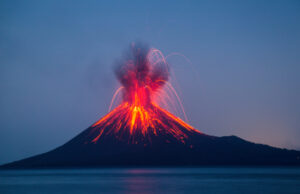 away in Rodrigues near Mauritius. At least 36,417 deaths were attributed to the eruption and the tsunamis it created. The sound was claimed to be heard in 50 different locations around the world and the sound wave is recorded to have travelled the globe seven times over. Following the eruption, there were increased seismic activity that continued until February 1884, although there is speculation as to whether on not that was because of Krakatoa. Whether it was or not, really makes no difference, because the effects that can be confirmes as part of the aftermath of Krakatoa are big enough on their own. The 1883 eruption of Krakatoa was a major event, and possibly the biggest on in recorded history.

2 Responses to The Sound Of Krakatoa