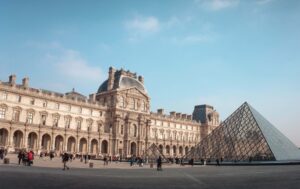 While I knew that the Louvre was not always a museum, since it was built in the 1500s, and no museums existed then, I never would have guessed that at one time it was a palace. I’m not sure why, it just didn’t occur to me. The construction of the Louvre palace was begun by King Francis I in 1546 on the site of a 12th-century fortress built by King Philip II. King Francis was a great art collector, and the Louvre was to serve as his royal residence. What better place to eventually become a museum than the castle of an art collector.

The work, which was supervised by the architect Pierre Lescot, continued after Francis’ death and into the reigns of kings Henry II and Charles IX. It seems that every successive king wanted to change things or add things to make it their own. Almost every subsequent French monarch extended the Louvre and its grounds, but major additions were made by Louis XIII and Louis XIV in the 17th century. Not only did these kings make major additions, but they also greatly expanded the crown’s art holdings, and Louis XIV acquired the art collection of Charles I of England after his execution in the English Civil War. Then, in 1682, Louis XIV moved his court to Versailles. That was the end of 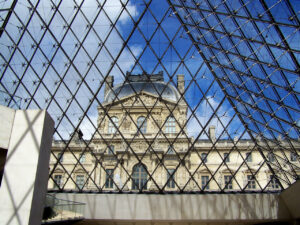 the Louvre’s time as the main royal residence, but it would not be closed up and locked away forever.

In the spirit of the Enlightenment, many in France began calling for the public display of the royal collections, believing that it would be a shame not do display them, and that they belonged to the commonwealth of France. The French writer and philosopher, Denis Diderot, was among the first to propose a national art museum for the public. In 1750 King Louis XV temporarily displayed a selection of paintings at the Luxembourg Palace, but it was not until the outbreak of the French Revolution in 1789 that any real progress was made in establishing a permanent museum. The French Revolutionary Government turned the Louvre into a public museum in Paris on August 10, 1793, calling it the Musée Central des Arts in the Grande Galerie of the Louvre. After more than two centuries as a royal palace, seen only by royalty and guests. With artwork and artifacts representative of 11,000 years of human civilization and culture, the art collection housed in the Louvre is one of the richest in the world.

The French army seized art and archaeological items from territory and nations conquered in the Revolutionary and Napoleonic wars, and the collection at the Louvre grew rapidly. Much of this plundered art was returned after Napoleon’s defeat in 1815, however the Louvre’s current Egyptian antiquities collections and other departments owe much to Napoleon’s conquests as well. Two new wings were added in the 19th century. The

Louvre complex was completed in 1857, during the reign of Napoleon III.

The Grand Louvre, as the museum is officially known, underwent major remodeling in the 1980s and 1990s. Modern museum amenities were added and thousands of square meters of new exhibition space were opened. The Chinese American architect I M Pei built a steel-and-glass pyramid in the center of the Napoleon courtyard. Traditionalists were outraged. In 1993, the 200th anniversary of the museum, a rebuilt wing formerly occupied by the French ministry of finance opened to the public, and for the first time the entire Louvre was used for museum purposes.