Sixty Years Is A Long Time 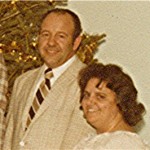 How does love grow? Sometimes people start out not liking each other, and later, things change. Other people like my Aunt Dixie Richards and the love of her life, my Uncle Jim Richards, it was pretty much love at first sight. Uncle Jim lost his dad at the young age of seven years, and when his family moved from Bassett, Nebraska to Casper, Wyoming, following the job search, Jim found himself befriending the Byer family. Because Jim had lost his dad, my grandpa George Byer became a father figure to Uncle Jim, who had never really had a dad in his life.

When Aunt Dixie and Uncle Jim fell in love, it was settled in their minds. The were married on June 3, 1961 and they never looked back. Over the years they helped many family members when they needed a hand or a place to stay. No one was ever turned away. Uncle Jim’s mother lived with them until she passed away. They always had extra mouths to feed, but God always made sure there was enough food to go around. He does that for those with a generous heart…and they definitely had generous hearts. I think that when two people are of like mind, and agree to be generous, helpful caregivers, they will be blessed. During the time when they were taking care of Uncle Jim’s family, they were also taking care of her parents whenever that was needed too. In reality they were lifelong caregivers, and that is a hard job that brings great blessings.

All during the years that they were helping so many people, Aunt Dixie and Uncle Jim were also raising their own family. They have three children Jeannie Liegman, James Richards (who passed away on February 16, 2021), and Raylynn Williams. They also have 6 grandchildren, Jacob Liegman, Gabriel Williams, Gideon Williams, Noah Williams, Jonah Williams (who passed away at birth), and their lone granddaughter, Mayme Williams. Their life has been greatly blessed, especially in that their children all live very close to them and they see them every day. Their children have always been there for them and to help with any other family

members that needed their help too. Their children learned their loving and caring ways from their parents.

One Response to Sixty Years Is A Long Time