The Lost Village of Curon Venosta 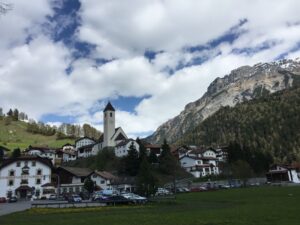 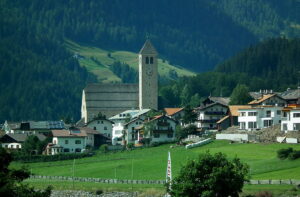 Curon Venosta was a village in northern Italy located in South Tyrol. Curon Venosta’s disappearance was not a mystery. The village suffered the same fate as numerous other towns over the years. The alpine village fell victim to the formation of a large man-made lake. The land was purchased and alpine village inundated shortly after World War II due to the construction of a dam. The officials had decided that they would join two smaller per-existing lakes into one large man-made lake.

Originally, plans were made to make a smaller artificial lake dated back to the year 1920. Then, in July 1939 a new plan was introduced for a 75 foot deep lake, which would unify two natural lakes. The point of joining the lakes together was to create a hydroelectric dam. The creation of the dam started in April 1940, but due to World War II and local resistance, the project did not finish until July 1950.

The new larger lake had a capacity of 120 million cubic meters, making this artificial lake the largest lake in the province and its surface area of 2.5 square miles makes it also the largest lake above .6 miles in the Alps. During the project, 163 houses and nearly 1.300 acres of cultivated land was flooded. The structures were not torn down, they were just vacated and flooded. The entire village of Curon Venosta is still down there, filled with sand. All that remains of the old Curon Venosta is the tip of a bell tower, standing in the middle of the lake. As a consolation to the angry villagers, a new village was built at a higher elevation.

The 14th-century church steeple was left to stand as a historic memorial, and was restored in 2009 to repair cracks. During the winter months, the lake freezes over, and people enjoy a walk right up to the spire. A legend 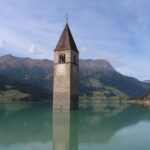 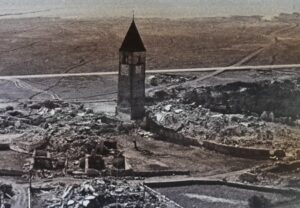 says that during winter one can still hear church bells ring, but in reality the bells were removed from the tower on July 18, 1950. The village of Curon Venosta was once a village of hundreds of people, and then it was sacrificed in the name of energy. Now, 70 years later, the lake was drained to perform some repairs to the dam. The people living in the area talked about how strange it was to walk in the ruins of the village they hadn’t seen in seven decades. Of course the sight of the village was temporary, and when the work was done, the village disappeared once again.