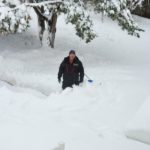 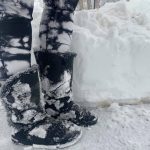 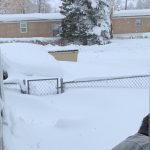 Sometimes, the “best laid plans” turn into the biggest unplanned event. Bob and I take a trip to Thermopolis, Wyoming each year to celebrate our anniversary. Thermopolis is a dinky little town with very little to do, except that it has amazing hot springs she that adds up to great mineral water soaks that are terrific for the body. We also take wonderful walks along the trail that is set up on the Bighorn River, which flows through town. It is a peaceful tradition that we love to continue. Nevertheless, sometimes life can throw you a curve ball.

Bob and I have both been snowed in during our lifetimes, but this storm was still something new to us, because 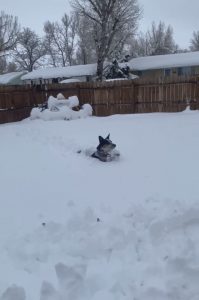 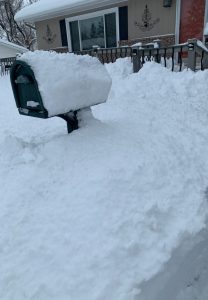 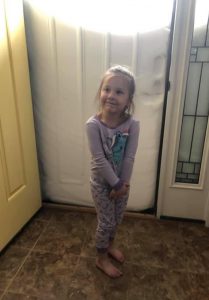 we are not snowed in. We are snowed out!!! Thermopolis got no snow at all, only a sprinkling of rain, but in Casper, which is home, it is a very different story. I have see n measurements of 18″ to 24″, and I’m sure it could be more by now. The roads in and out of Casper are closed, and since we are in Thermopolis, where there is no snow, we are not snowed in, but we are snowed out of Casper. It is a matter of the fact that you can’t get there from here…at least not today.

I can’t say that I am exactly heartbroken about having to stay at least an extra day in Thermopolis. In fact, I’m hoping that a lot of the snow will melt before we get home. That would simply not hurt my feelings one bit. I have been talking to my sisters, Cheryl Masterson, Alena Stevens, and Allyn Hadlock; and my daughter, Corrie Petersen and grandson, Chris Petersen in Casper; and one sister, Caryl Reed in Rawlins, and they have graciously provided me with what I cannot see here. Tons and tons of snow!! The pictures of all the work trying to dig out, and the futility of such a venture in most cases, are shocking. It’s hard for me to fathom 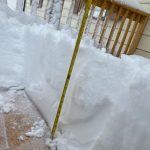 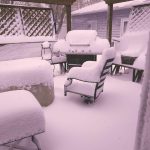 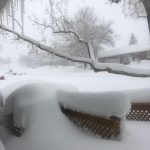 the amount of snow from here, but I can say that it is massive. Even my niece, Lindsay Moore in Laramie, and my nieces, Liz Masterson, and Jenny Spethman in Casper, have added to the amount of pictures that have told the story of this huge snow day. It is truly a kid’s dream, and for those who couldn’t go to work today and won’t be tomorrow, it isn’t the most horrible news either.