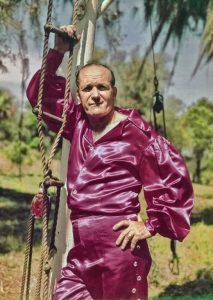 These days, we are all pretty used to stunt people who take wild chances to prove their prowess. It happens all the time. Whether it’s television stunts, circus stunts, or the daredevil stunts, they all have one thing in common…they live to show off their ability to perform these stunts under pressure…even if it costs them their lives, and it has. Many people have heard of Evel Knievel who was famous for jumping his motorcycle over everything. And then there were the car jumps on the Dukes of Hazard. But, really I think the circus was the real beginning of stunts. I could be wrong, but the tight rope walkers and the trapeze stunts, often without a net while a seemingly more tame version of stunt work, were still stunts and still dangerous.

One stuntman, Karl Wallenda, born on January 21, 1905, was a German-American high wire artist, and a member of The Great Wallendas, with whom he began performing at the age of six. His family became a daredevil circus act which performed dangerous stunts, often without a safety net. They soon became world famous, and with fame came more and more difficulty of stunts, and more danger. Their stunts were exclusively high wire, and not trapeze, but they were elaborate and demanded the highest level of skill and bravery. I doubt if any stunt performer really thinks of their own demise very much, but I suppose it is a thought that must enter their minds periodically. 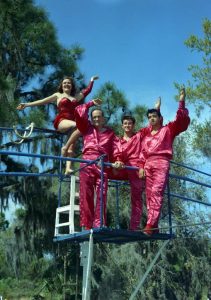 The Great Wallendas were famous throughout Europe for their four-man pyramid and cycling on the high wire. In 1928, Wallenda moved the act to the United States where they became The Flying Wallendas. There they performed in ever-increasingly difficult stunts, as freelancers. In 1947 they developed the unequaled three-tier 7-Man Pyramid. Karl Wallenda had the idea since 1938, but it took until 1946, when he and his brother Hermann developed it and had the right acrobats for it. Prior to that time, the Wallendas had been famous for the four-man pyramid and cycling on the high wire. In 1962, in Detroit, the Wallendas fell during a performance. Two members of the troupe were killed and Karl Wallenda’s son, Mario was paralyzed. Still, after such tragedies, the family determined that the show must always go on, usually after some regrouping. Another performer, Riette fell during a performance in Omaha, Nebraska, and was killed a year after the first tragedy. Karl decided not to continue that part of the act, but his daughter, Carla wanted the act, and after being told no, set out to perform it herself. When he saw her determination, Karl allowed her to have it, and she performed it without mishap. A made-for-TV movie about the family came out in 1978 and starred Karl Wallenda. The movie depicts the act’s comeback after a fatal accident involving several family members during 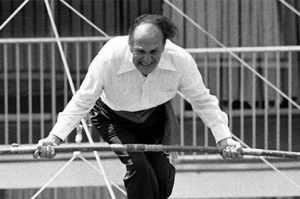 a performance. It looked like the great American comeback, but Wallenda was killed in a high wire accident in just 38 days after it was first broadcast. On March 22, 1978, Wallenda was attempting a walk between the two towers of the ten-story Condado Plaza Hotel in San Juan, Puerto Rico, on a wire stretched 121 feet above the pavement. The winds were high that day, and as a result that, and an improperly secured wire, he lost his balance and fell during the attempt. Wallenda’s face depicts the moment of realization and anguish when he knew that he was doomed. Wallenda was pronounced dead after his body arrived at the hospital. Karl Wallenda was 73 years old.

One Response to Flying And Falling